Its been a busy month!! Whew! Hard to believe October is coming to an end! On  my visit to West Virginia two weekends ago, I was playing with some in camera multiple exposures and swipes. The trees had lost a lot of leaves in the Davis area but further south there were still plenty to be found. The image above was made on the forests edge as the late afternoon sun lit the sides of the trees, by moving the camera up or down as the exposure was made I rendered this image. In processing swipes I find I tend to add back contrast and saturation to help define the subtle colors.

This image was also made with the same technique only with a little swoosh-like movement at the end of the exposure, generating the cup like lines adding texture.

This image is a 9 shot in camera multiple exposure. I like the look of this technique in this image. The ground was covered with white balls of cotton grass and the late afternoon light was soft overcast-blue sky side light.

This forest was filled with light and yellow leaves, another multiple exposure shot rendered this fun image. Soooo...when you are out in the field remember to try some fun swipes and multiple exposures if you have the option. Tonight I am looking forward to the fourth session at Johns Hopkins University of my iPhone Photography class and this weekend I look forward my Beach Workshop...
You can find my workshops listed on the side bar of this blog or at the Capital Photography Center website.

Elakala is a most frequently photographed waterfall in Blackwater State Park, West Virginia. I had a couple hours in the morning to hike in and make a few images here before checking out and leaving West Virginia. I love this scene in the fall with the beech tree leaves decorating the floor of the forest. When I teach intro to Digital Photography at Johns Hopkins, beginning photographers always ask what shutter speed do you use to get that look...well the answer is.... depends on how fast the water is moving, how bright is the light one is working in, what focal length is the lens and what ISO are you shooting? There is no one stock answer for shutter speed and waterfalls!
Since the water was running slowly this day and I had some foreground, I stopped down my aperture and also took my ISO down to Lo on the opening shot. When I took my first photo workshop, many years ago, it was with John and Barbara Gerlach in the Upper Peninsula of Michigan and we shot lots of waterfalls. I learned from one of the best at that time, by spot metering the white part of the waterfall and adding a stop of light in manual exposure mode. This generally gave me a good exposure but the dreamy look is contingent on the speed at which one allows the shutter to lag and the flow of the water, so experimenting is essential.
Now you can also play with choosing an in camera multiple exposure to create a similar look and stack up the water flow. I love this waterfall also for the ability to make intimate compositions of the mossy rocks decorated with the yellow beech leaves and the veil like streams of water . 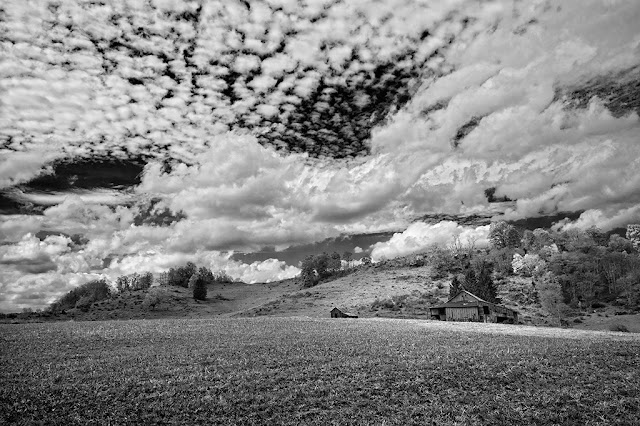 This weekend was a get away weekend for me with a small group of photographers from the Baltimore Camera Club. When reviewing images today, I processed a group of them in black and white. I really like using the color filters in Nik Silver Efex Pro 2, as if using filters on your lens with Black and White film..they can dramatically pop a black and white image, shifting tonalities in a certain color spectrum. When making images in bright sun light the filters can really enhance the image during processing. 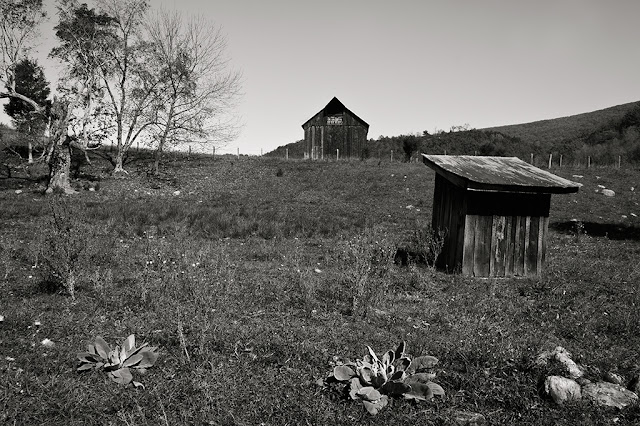 I saw the barn above from the road we were traveling on, and wanted to see if I could get a shot of it so, I quickly turned down a dirt road...and yes it was on private property but not signed "No Trespassing", as many of the West Virginia dirt roads are! Moments later we were confronted by the owners and after some conversation they agreed we could make images on their land. There was also an old house which was their grandparents home, that had fallen into a state of disrepair so with their blessings we made some images of the house as well. Thanks! 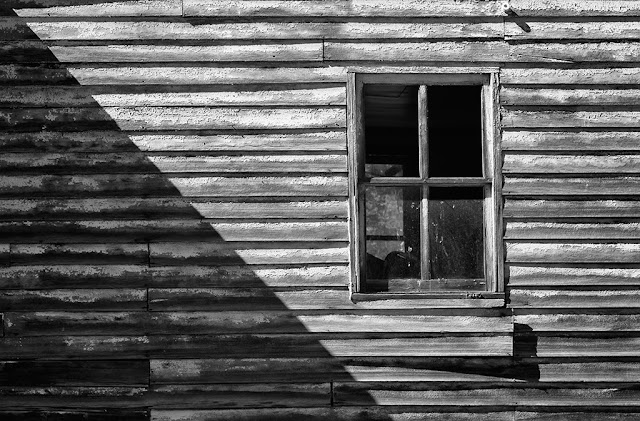 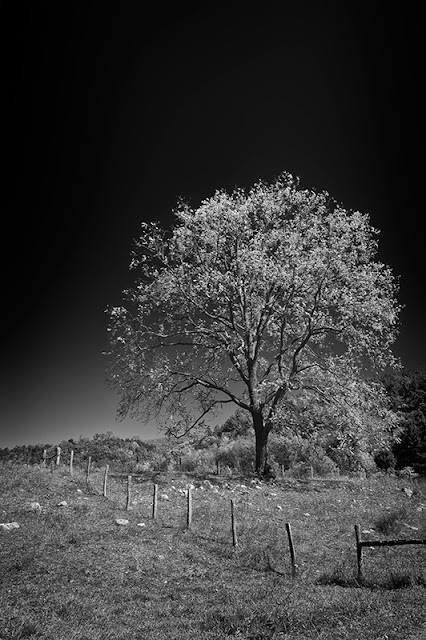 We ended the day of shooting and driving, as the sun was setting on Seneca Rocks. It was a long but fun day!
at 8:40 PM No comments:

Headed to  the beach on Friday and after packing the Jeep, cutting the grass before leaving home, making the 3 hour drive and unpacking the Jeep...I was ready to chill. But the hot rods were in town and the weather report looked bad for Sunday when I had hoped to get some shots and just wander among the cars enjoying chatting with the owners and looking at their cars, so......after a quick nap, I headed out. It is so cool to see these cars packed onto a few parking lots in a couple blocks in Ocean City, Md. I go to the Burger King on Ocean Highway in OC, where they park at night and the sidewalks fill with people in lawn chairs watching the cruisers go up and down Ocean Highway. It really is a blast! Anyway, it was dark and I was lazy, had the 28-300 on the camera, usually shoot with the 70-200 in this situation to gain a stop of shutter and its just a finer lens, but I just grabbed the camera with the lens that was on, and no tripod due to crowd issues. It was more about being there than getting some shots; just Love the sound of the engines!! When there was enough ambient light I made a few shots. The opening shot was possible because there was a pick up truck parked directly across from this rod with a large traffic stop light lit up in the truck bed casting super light on the grill. I had to wait as people walked between the truck and the rod to get get a shot, and had the camera set to Continuous High shooting mode and made a series hoping one would be crisp enough to work with.


I enjoy a good paint job on a car and really love to see beautifully painted art on the cars. In processing this image I decided to use free transform in Photoshop. Since the car was unevenly lit the right side of the image was darker and I didn't like it. I tried working a selection to lighten the darker side and do some cloning but I was not getting a result that satisfied me. Because the design was in fact symmetrical I selected the half of the image  that was well lit and transformed it to the right side that wasn't. I also cropped a little off the top and made a few other color sat, luminance, and lens vignette filter, adjustments in Photoshop. Here's the before shot from the raw file. Processing images is a large part of making a good image. I spent the afternoon yesterday helping a "new to processing" photographer work through some processing steps to enhance his images. He has been shooting for decades but recently decided to revive his love of photography and work in the digital world. It reminded me of how much there really is to know about processing images and how intimidating it can be to a new photographer, but you just have to jump in!!


Leaning against a fast food wall to steady myself I loved the way the neon lights highlighted the curves of the fender on this one! and it had some pretty wheels too! and.....it was Red! I didn't mind the black graphic of the fender well, it added a cool shape feature to the image for me, accentuating the wheels. 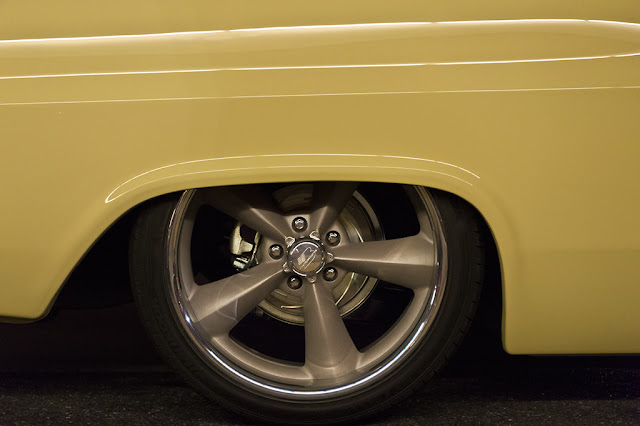 Sticking with the pretty paint, pretty wheels and light from the shop nearby, this beauty a 65 Chevy Impala totally customized with a 450 engine, was a beauty. I spent some time talking with the owner and restorer of this one. So much fun, looking at the creativity of the restoration. 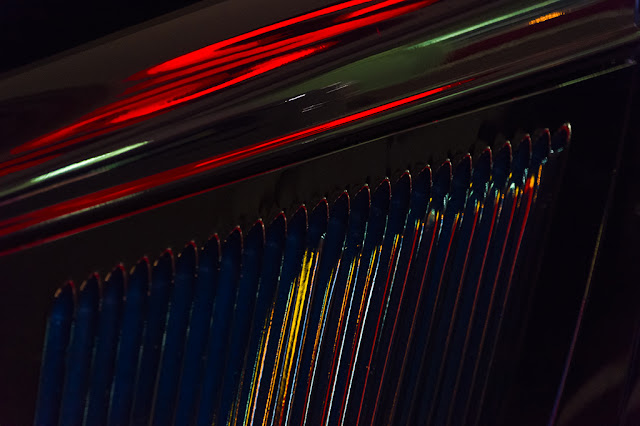 This was a what if shot....what if I try to just capture the lights off that paint. Fun...if I was on a tripod this one would be sharp font to back and I would have chosen a higher f-stop, but because I needed a least the same shutter I had been getting I could not stop down. I liked it anyway!
Fun night looking at the cruisers. Now its RAVENS time! What a great day, the Ravens play and the Orioles do too! Perfect on a rainy Sunday! Go O's and Ravens!!