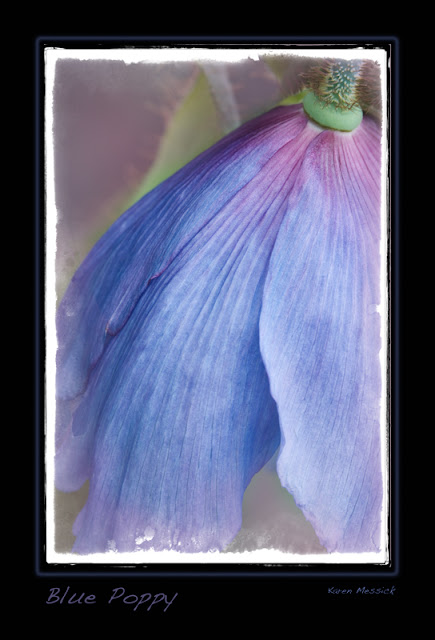 Jeez, it seems like a long time since I was at Longwood with Chuck, so much has been going on.
I never even got a chance to finish processing images from that visit until today. Sometimes when you go out shooting you just don't find a groove; that was the case for me on this shoot. I had just visited Longwood a couple weeks before and made some images I liked, so this visit I was just wandering, trying to get a feel for what had changed. The first place I stopped to shoot was for a small pot of blue poppies near the children's gardens. I set up my tripod and coupled the 52mm extension tube onto my 200mm macro to see what I could come up with. I made two shots and realized the lens was fogging up so I had to wait until it acclimatized. I made a couple shots there before a man came up with a point and shoot camera and literally asked me to move my set up so he could take some pictures. OK now I don't mind sharing but isn't there a photographers decorum? Well, he was sent from some where in the Longwood management to get a picture for their blog...So I moved on. I made some close ups of the Clivia and wandered into the Mediterranean room where I enjoyed the display there and made some HDR shots which I later processed in Nik's HDR Efex Pro. After that I continued my ramble and came across the nectarine blossoms and made a few shots there....that was it a fast three hours...Chuck and I had a nice lunch and he headed home. I headed back out onto the grounds and made some iPhone shots...but that's another blog! 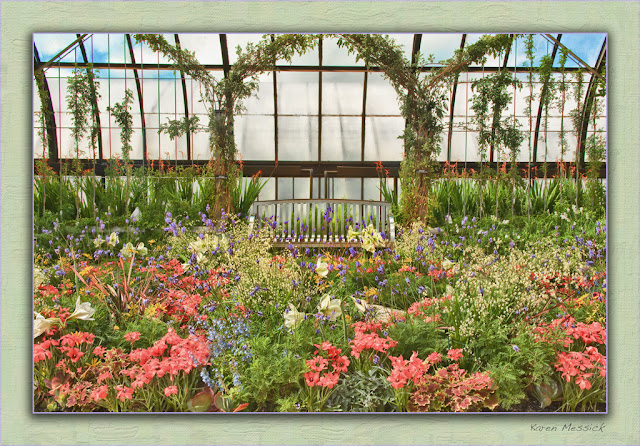 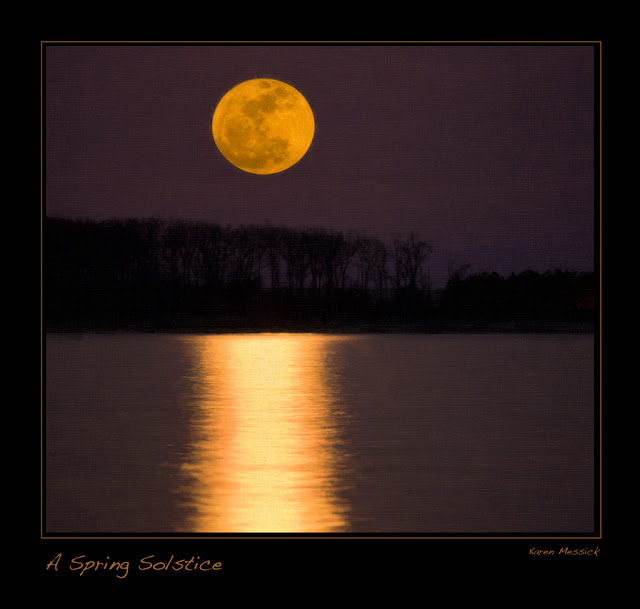 Tonight I headed out to see if I could catch the "Super Moon" rising over the bay. The app for the iPhone, Photographer's Ephemeris, pinpointed the moon rising exactly across from Rocky Point State park at 7:47pm. Hart Miller Island lay on the horizon in front of us giving us a bit of forest on the horizon. The moon travels very fast...and it is really hard to get a sharp shot without pumping up the ISO, and since my sensor is a bit old...it does not have great ISO capabilities..but I was there and made some shots, as the moon rose big and red in the Eastern sky. We stayed until it turned golden and then silver and it was too dark to shoot anymore. I used Sanpart2 on these to give them a painterly look and mask the noise in the photo image, and because I enjoy seeing images this way. 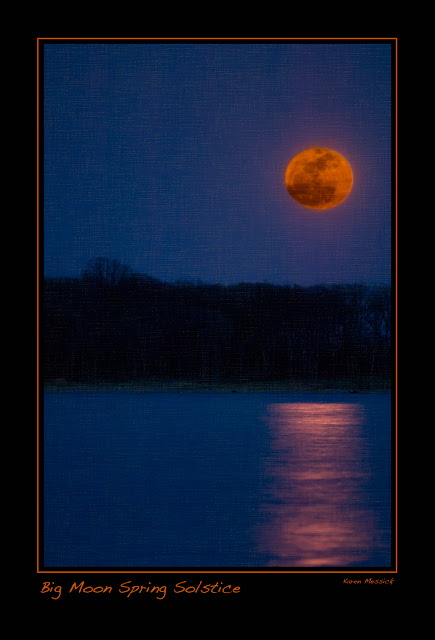 Thursday morning I met Lewis on Shawan Valley Road to do a little morning shooting. We drove around a little until we found a scene off the main drag, where we could pull over. The area is horse country so jumps and trails are every where. The overnight temps had fallen and a little frost was on the ground. As the temps were rising the melting frost was creating some atmosphere.

We continued our morning drive and ended at St. John's Parish, and here's a little history of the place....


Determining that a sufficient number of communicants existed nearby, a group of prominent Worthington and Western Run Valley Episcopalians established a new church: St. John’s in the Valley. The cornerstone for the first church building was laid on June 3rd, 1816 by Bishop James Kemp, just four short years after a fellow Baltimorean, Francis Scott Key, penned his poetic words while observing the British bombardment of Fort McHenry 25 miles to the south. The completed structure was consecrated by the same clergyman on November 13, 1818.
On Christmas Day 1867, St. John’s Church was completely destroyed by fire with only its steeple bell and cornerstone to be salvaged. In March 1869, the rector secured a plan from Joshua Shorb, a principle in the firm of Shorb & Leister in Westminster, Maryland, to rebuild the church at a cost of $9000. The cornerstone was re-laid on August 17th, 1869 and services were held in the new sanctuary the following summer.
Today this splendid example of Gothic ecclesiastical architecture is a graceful landmark within the valled countryside of northern Baltimore County. The church building is complemented by its equally historic rectory, built in 1842.
It was a nice morning!
at 10:51 PM 1 comment:

As I look at the images from this shoot, I think they are the most colorful collection of images I have seen on my desktop for a while...maybe that's because it has been a brown winter around here...but I am struck by the amazing blues from the deep clear blue sky reflected in anything with a glossy surface, the yellows of the buildings, the rust red and green and blue paint on the cars....I just loved the colors these images offered up. Of course I saturated a little, but all these colors existed in this space. The car farm has more than cars to capture the photographers eye. 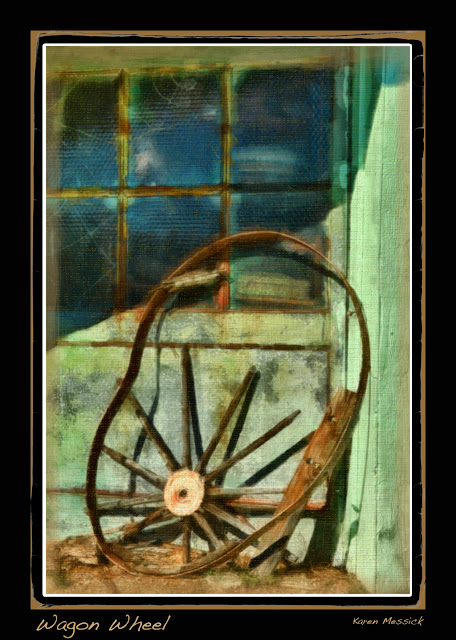 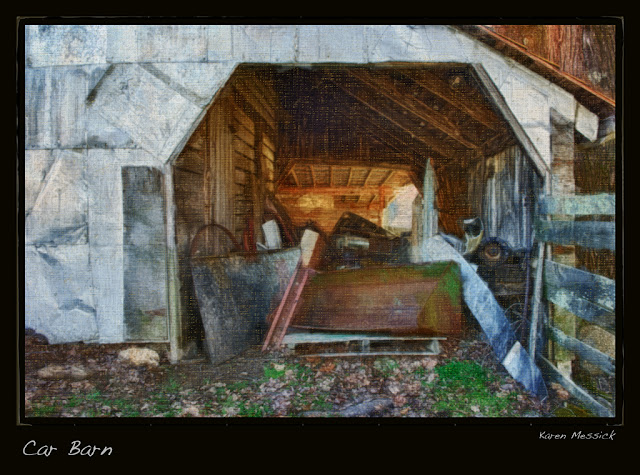 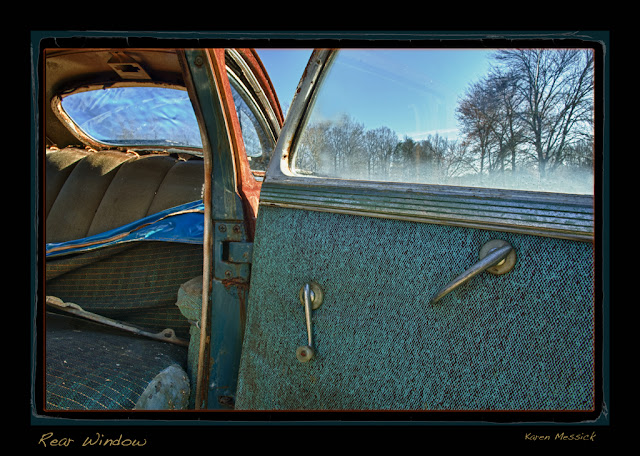 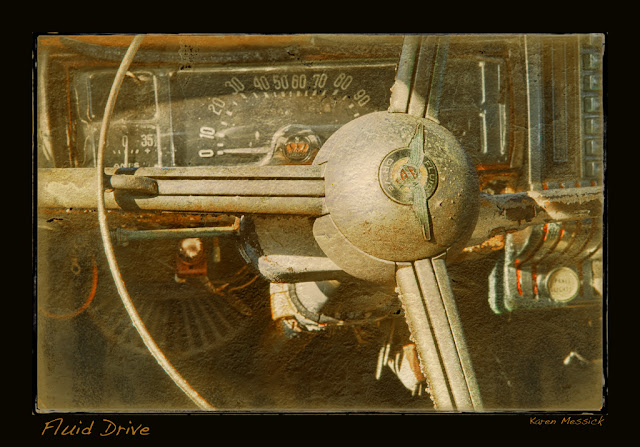 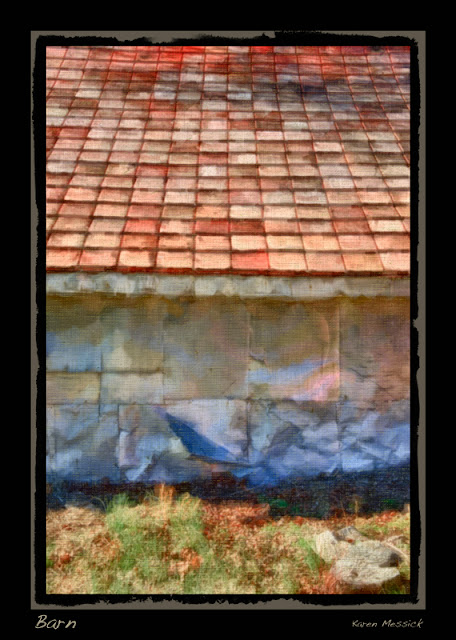 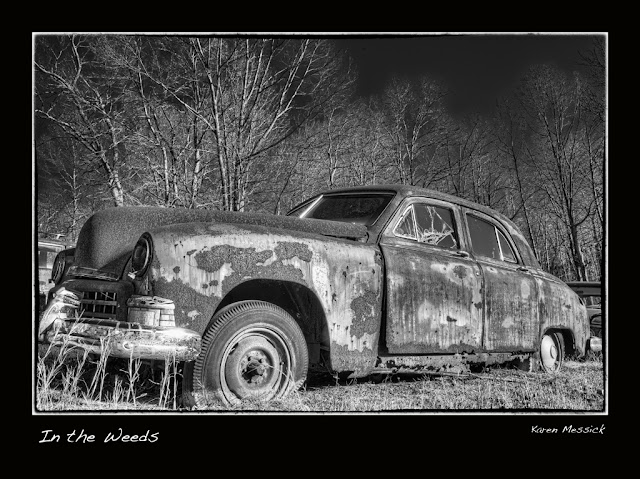 Been working on some images tonight after my class at Hopkins and I decided to make some of these images from the car farm into black and white conversions in the new Nik Silver Efex Pro2. All the white frames were also added in Silver Efex Pro 2, a nice enhancement from the original. I'll be doing some demos on this in my day long workshop on processing images with Photoshop Plugins' for Penn Camera. A link to the workshop can be found on the sidebar, hope you can join me. 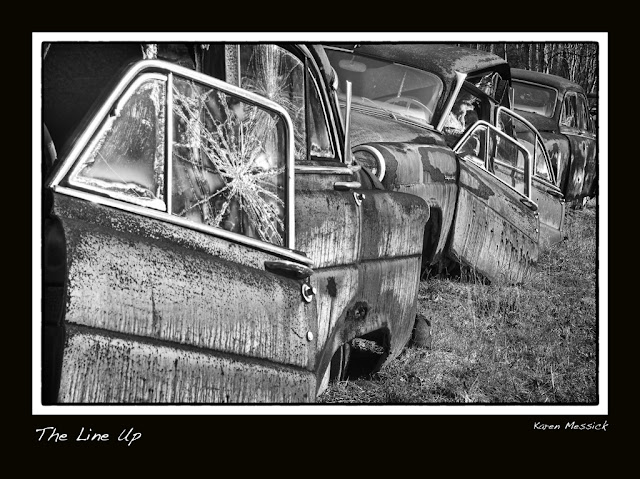 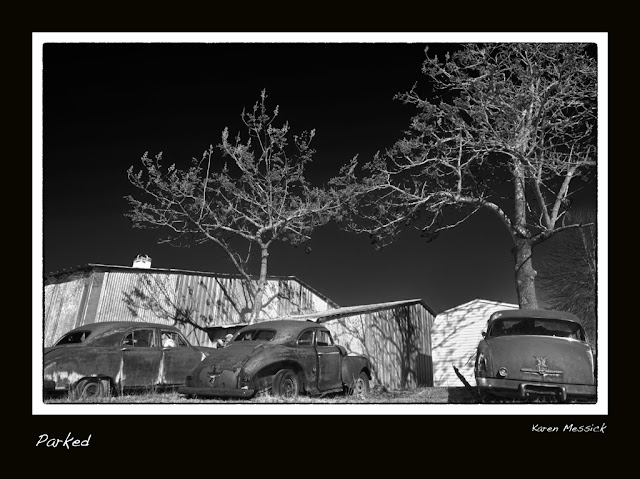 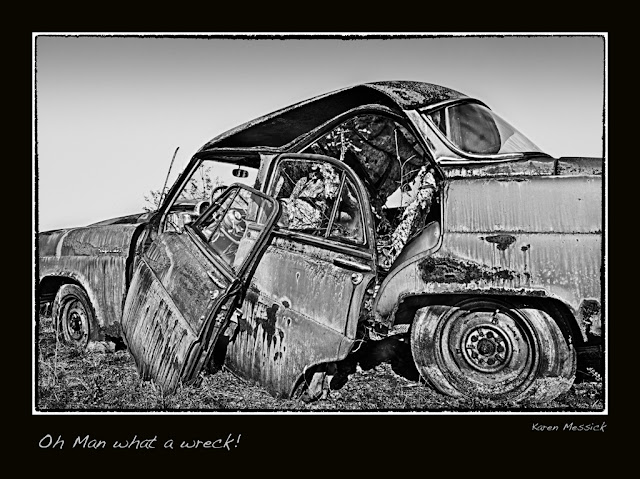 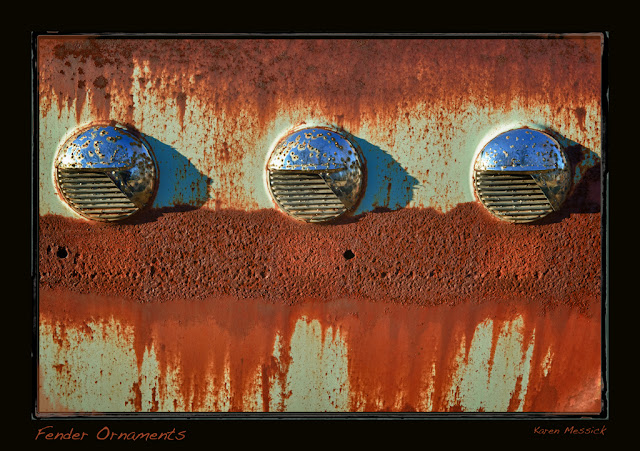 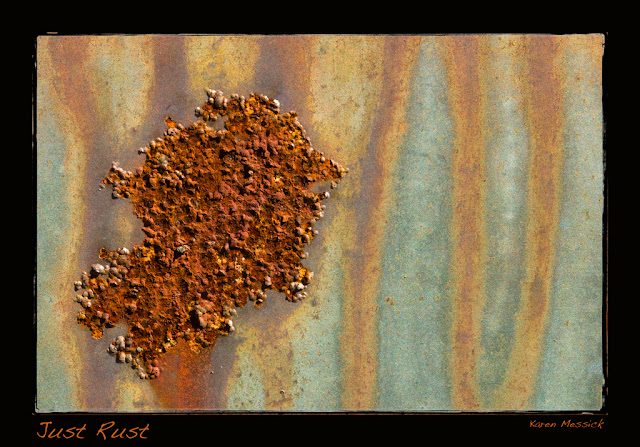 Yesterday I visited the Car Farm in Virginia, officially called The Roaring Twenties Antique Car Museum. I had a blast yesterday. We didn't actually go in the Museum we shot outside in the "Car Farm." Yes, cars out in the field rusting away in all their glory from the 40's, 50's and 60's.I wondered about the lives of the folks that used these cars and pondered the decades in which they were vital. 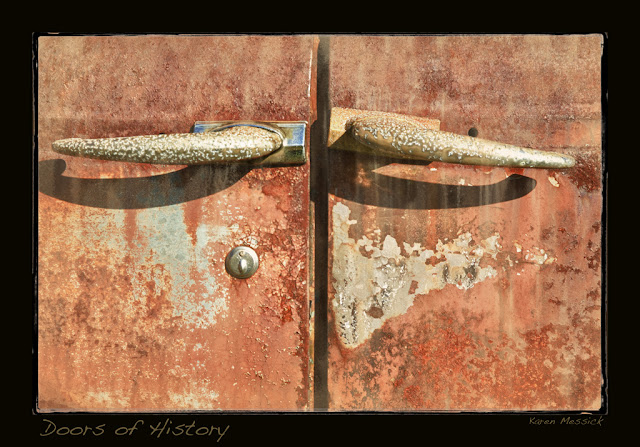 It was an extremely bright sunny day, with clear blue skies...so that means harsh shadows..and HDR..or some detail shooting. I love details for the beauty of their design and their shapes and textures. Hood ornaments, door handles, rust textures and paint deteriorating...got me started. My first lens for the day was my 200 mm macro. I wandered a bit and then saw a car that was originally green, with deteriorating paint and red rust, I had to stop! That's where I wanted to begin my shooting for the day. The car I was working on actually looked like an old Chevy my dad had in the 50's, it was green too. I spent some time there with the macro. 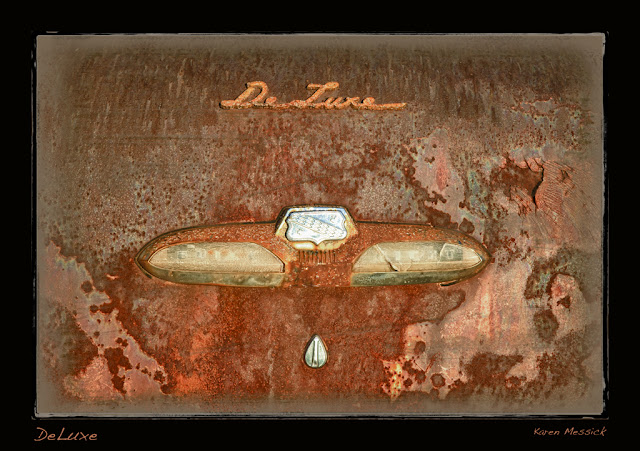 As I continued to work the details I saw the deep blue sky reflecting off the deteriorating chrome and loved the combo of the blue and rust so I made some shots with that idea in  mind. The hairlike scratches on the locks made me wonder who had put their key into that lock many years ago. 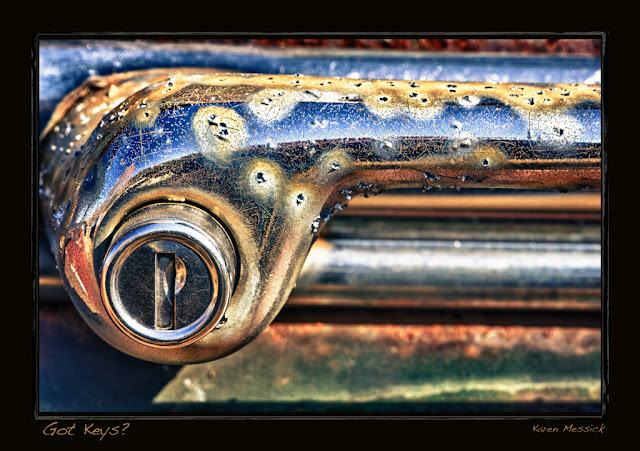 The bright sun created interesting shadows on the peeling chrome adding dimension and texture. I made some shots with my iPhone as well, I will be posting more over the next day or so as I get them processed... 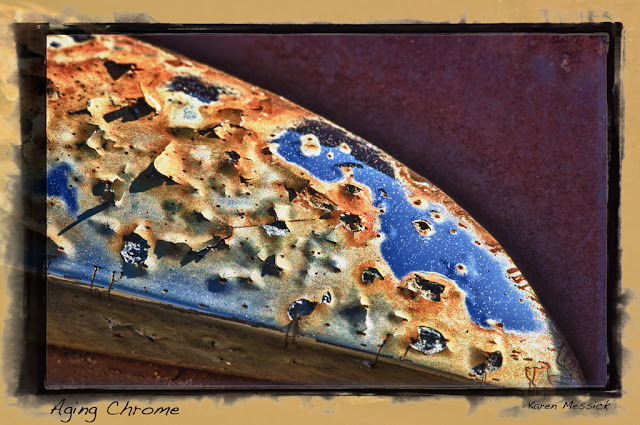 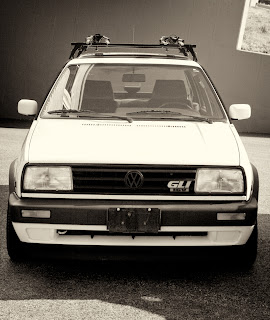 Said goodbye to an old friend today....OK, so its not a super expensive car...the factory sticker had it at $16,700....in 1991, and yes I do have the factory sticker and every maintenance ticket since it was new......this little car has been a part of my life for 20 years! Longer than any husband I ever had! It always took me wherever I wanted to go! and never failed me until this past summer when the starter motor failed and then again this past fall when the clutch cable popped in Fells Point...then a couple weeks ago I noticed a pretty bad scraping in the front wheel, brakes no doubt, and the little ticking noise when I put it in reverse...the trans....and the rust creeping ever so along the front window, because I had the windshield replaced twice and the paint seal became broken...(I had the rust fixed once).... The rust creeping along the drivers door because it too was replaced when someone jammed it hard in a mall shopping center.....and so when the repair bills totaled up it just did not make financial sense to keep her anymore and she was not safe to drive the way it was.......well, OK,  I do have a 2003 Passat and I just got a new Jeep this past fall so I am covered when it comes to transportation...but this little car was more than that...it was my past.....I fell asleep in it on the way home from Annapolis Mall...after working some ungodly hours for weeks on end getting the store ready for its grand reopening after months of renovation.....I took some great road trips in it...Northern Michigan and New England.. ran it up over 100mph on I-95 one night......and it took me to the funerals of both my parents, and Aunt, my daughters graduation......and I had many a great summer ride in it with the sunroof open shifting through the gears on some country roads....Spent many a warm summer day lovingly washing it in the driveway. The tags LOYO292 bore  the name of my college I was so proud to have attended and was the 292 graduate to buy the tags from the College oops its a University now.....but they are gone too.....so I had to finally say goodbye....today. I grabbed this one last shot as it sat out front of the shop doors where one of the mechanics bought it from me for the interior seats: Recaros, factory originals in great shape and maybe he will part it out after that...but she's gone! There is an empty space in the driveway...and...more......hard to believe I had such an attachment to this little car.......Oh and I ran this through Nik SIlver Efex Pro 2 for the toning..... Moving on down the road now...Thanks VW for the ride. Call me crazy...I loved that little car!
at 9:48 PM No comments: