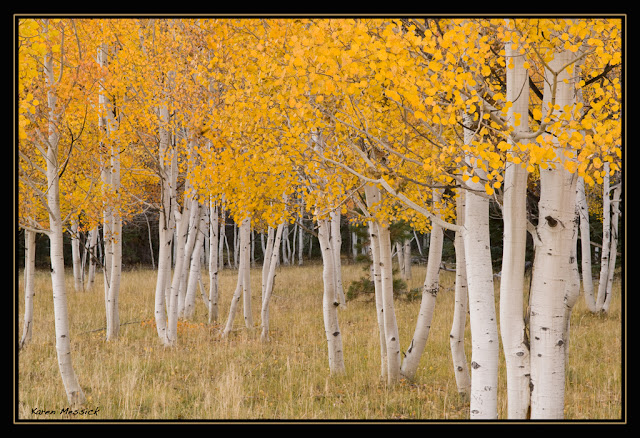 Reason number two to visit the Grand Canyon North Rim in the fall is Aspens and Pines. The first night we arrived in Jacobs Lake we drove down the park road as the evening light was fading. Steve spotted this amazing grove of Aspens and we made a few shots there before the light totally faded to dark. There was no wind to speak of so our long exposures were fine in the fading light. After our sunrise shoot the next morning we went on an Aspen hunt and found an amazing hillside in the shade of Aspens, and Blue Spruce. Jackpot! We made images there for at least 45 minutes from the side of the road and not one car passed us while we were there. I could have made images there all day, but we had to get on the road for Sedona. The park had a fire in 2001 that wiped out a lot of the Aspens on the top of the ridge, so we were really happy to find these. This is an amazing display the beautiful Aspens put on in the fall. Now there is just one more reason to go back! 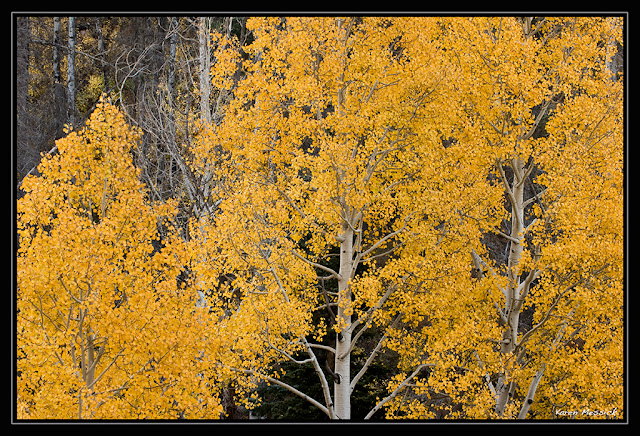 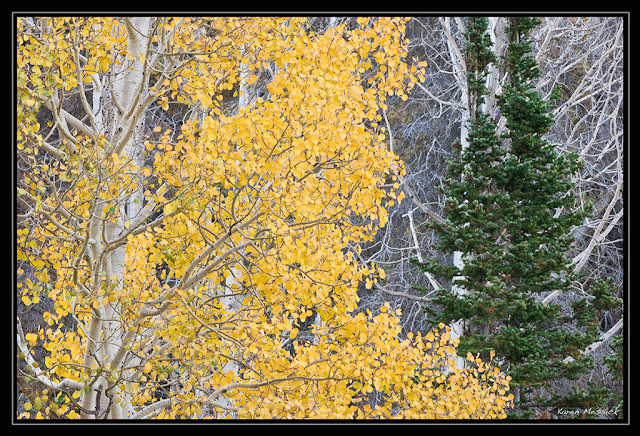 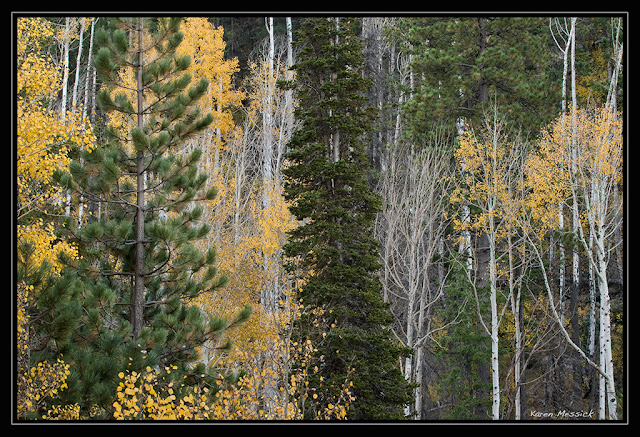 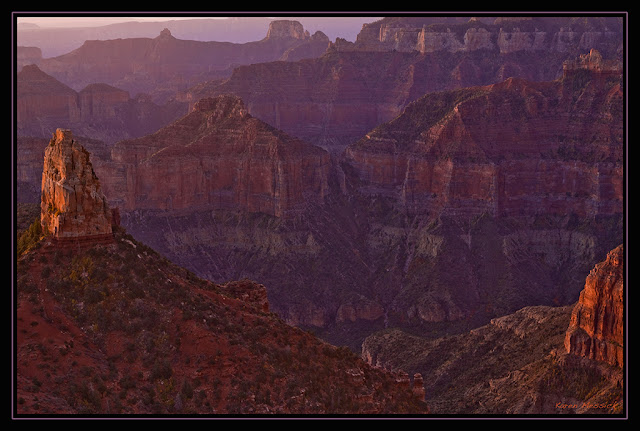 Driving from Kayenta, our next stop on the road trip was the Grand Canyon's North Rim. We decided to head to Point Imperial for sunrise an hours drive away from where we were staying in Jacob Lake. At 8,803 feet, Point Imperial has the highest vista point at either rim; it offers magnificent views of both the canyon and the distant country. I had hoped for some cooler temps here and that fall would still be under way. I not only wanted to see the North Rim but also hoped for Aspens. (I got both, but the Aspens will be another blog post.) As there were no clouds in the sky I focused most of my shots into the canyon. It was 29 degrees at the rim.  Arriving in brilliant moonlight provided an amazing first view. 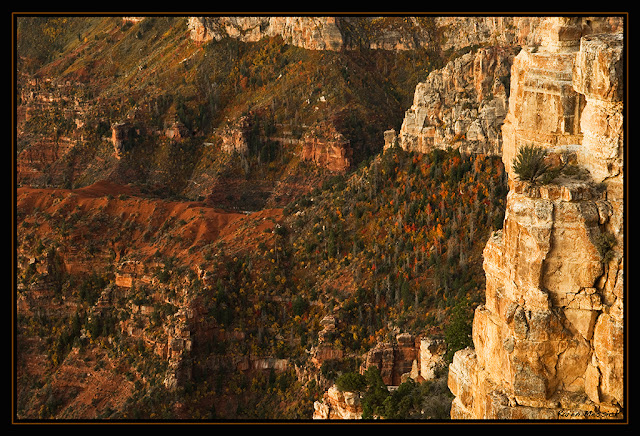 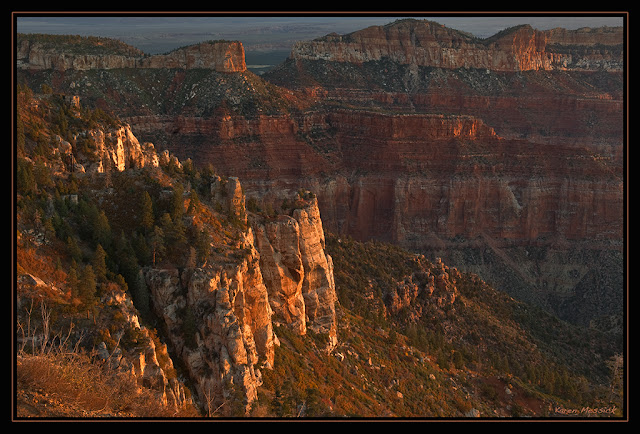 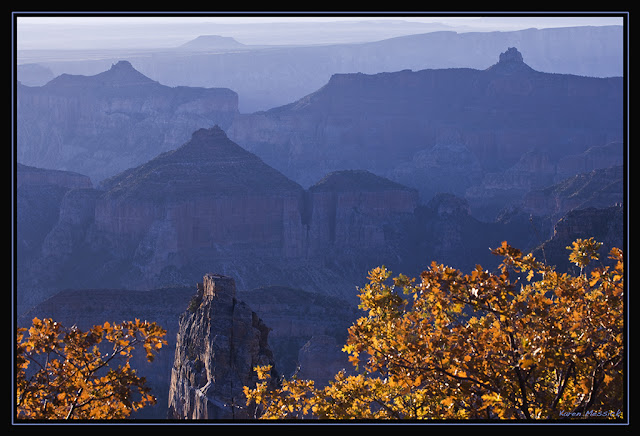 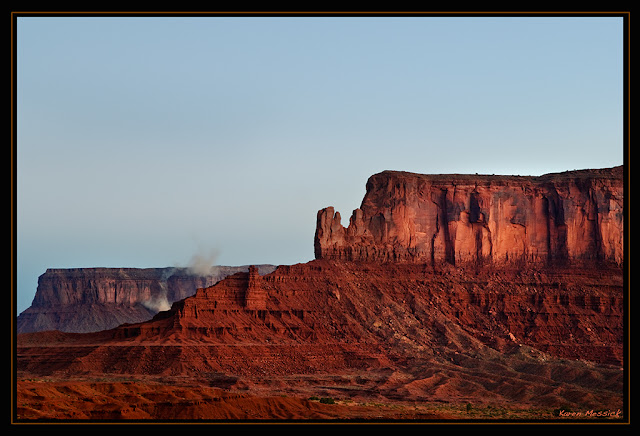 As soon as the sun broke the horizon we left our sunrise location to drive the loop road through the valley. Just before we packed up I looked behind me as I always do to see if there was anything happening and as I looked I saw what first appeared to be smoke in the distant landscape, but instead we decided was the dust trail from a boulder that had cut loose and tumbled down the ridge. So I quickly grabbed a shot before heading down the road.
The first few hundred feet of the loop trail are pretty daunting if you are driving a passenger car. We had pretty good ground clearance so we continued on knowing the car was going to be pretty dusty when we finished the 17 miles of dusty, rocky, rutted, red trail through the valley. We stopped before the light was harsh and made a few images.The valley is amazing and I surely hope to visit again! 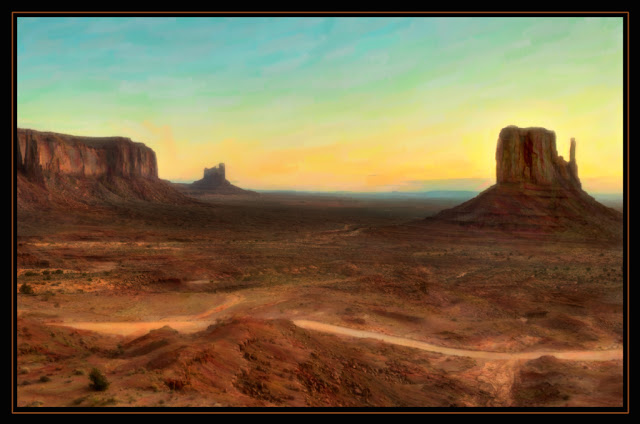 Last Christmas my nephew gave me a travelers guide to Arizona and he said I should come out and visit, which he had said before, but I felt he was just being courteous. When he gave me the book I realized he was serious. I said OK lets do it! So, On Wednesday October 12, I left Baltimore with my nephew, Steven for a road trip to Arizona, his winter home after summer ball season. We were both looking forward to the road trip, as we had decided to make several stops at some iconic American West locations. After making it to Nashville the first day, we headed on to Little Rock where we visited the Bill Clinton Presidential library. That was interesting and gave us a little sight seeing time in Little Rock. After lunch we drove on to Norman, Oklahoma and stayed with some of his friends until Sunday morning. On Sunday morning we left at 6:00am and planned on driving all the way to Kayenta, Arizona where we had booked a room close to Monument Valley for sunrise on Monday. It was a pleasant but long drive and I was excited seeing the landscape transform from flat lands to amazing red rocks. I had done a little research on the road using my iPad and we decided that we would make our morning shoot from the back of the Visitor Center once in the valley. On the way there in the dark at 4:00am with a very bright moon we could see shadows of the rocks. Steven spotted one before we got into the park area and we stopped along the road. I was helping him with his new camera the Nikon D3100. It is a super little entry level DSLR with 14 mega pixels. In my desire to help him I forgot to take mine off of ISO 400 and got some very noisy shots of that rock, so I used some SnapArt to salvage the scene and make a painterly effect. I liked it so much I have applied it to the rest of the images I made there that morning. We were using the timer on our iPhones to count out our 3 minute exposure. Just one more great thing about the iPhone! The shot below is the one we made at that first stop. I loved the top down light on the rocks in the dark from the moon and the small trails the stars made with the longer exposure. 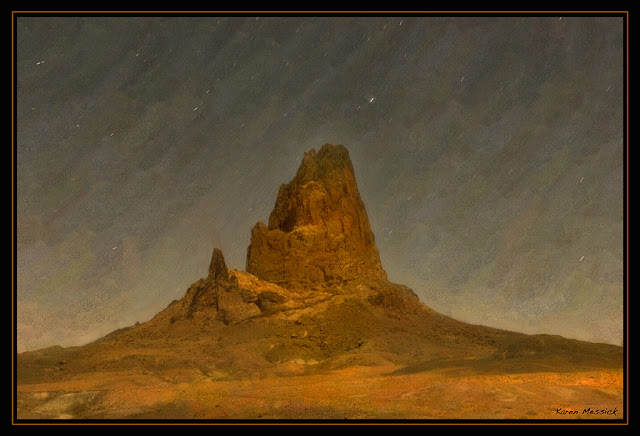 After entering the park in the dark, I scouted the spot behind the visitor center where there were already a couple more photographers and an Indian tour leader looking for his group which never materialized. He hung around a bit with us chatting a bit about what he does and great places to go. 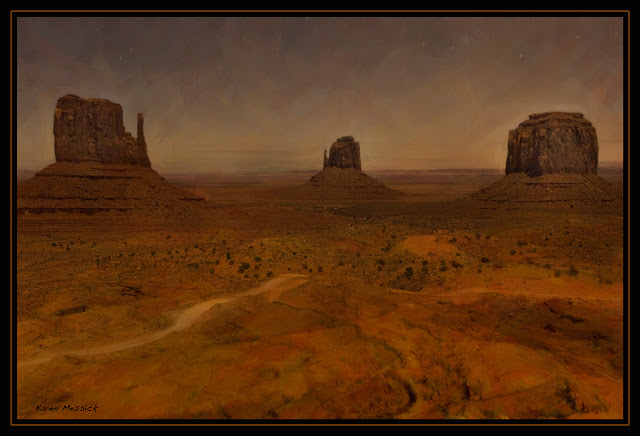 I explained that we had decided to be here and we did not have much more time as we were on the road after sunrise heading for the Grand Canyon. We did not have any clouds in the sky but we stayed and made some shots as dawn turned into day. Definitely a place I want to go back to and spend a week! After sunrise we drove the loop through the valley, but that's another blog. 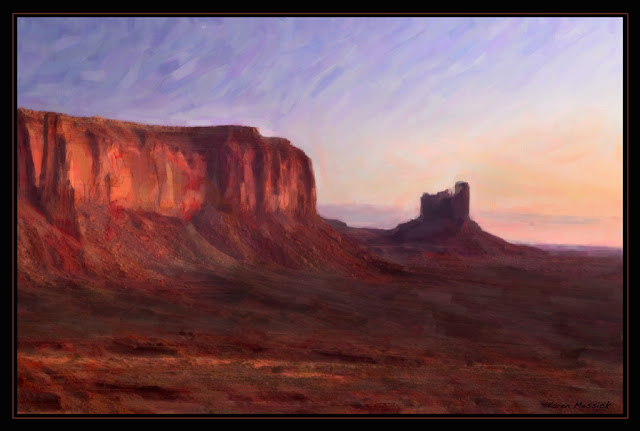