This past Sunday, I got out on the road with Steve Oney and Don Vetter; we headed to Bombay Hook National Wildlife Refuge in Delaware. It was a beautiful blue sky day..not exactly what we were hoping for but we went anyway, we were all up for a day out with photo buds!
We were hoping to find some snow geese, but we found none. However, as we were driving the loop road around the pools a small red fox appeared on the side of the road...Don, who was driving slowed to see what the fox would do as he inched the car closer. Well the fox traversed the road, marked the other side of the road and then headed back across the road in front of us and dropped off beside the car into the grasses. I couldn't get a real good shot of him because of the tall grasses, the shadow of the car and rear view mirror. I did manage at one point to snag this shot out the passenger window. 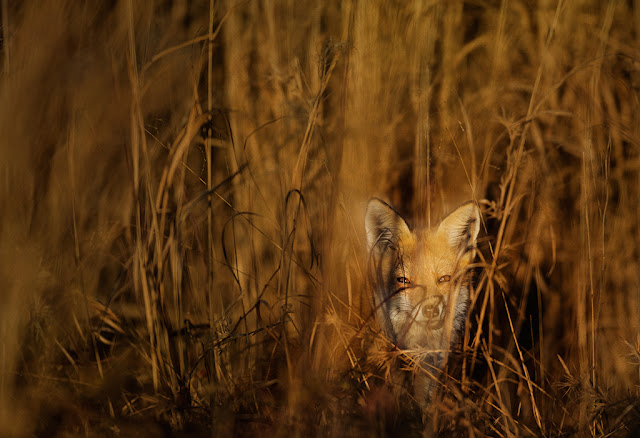 We tracked this little fox hoping for better shots, but cars making the drive around the loop kept spooking the fox back into the grasses. The light started to fade and Don parked his car and we waited for something to happen as the light slipped away.
While we were waiting for sundown, I saw there was a gentle color in the sky behind the marsh trees and I made a few multiple exposures. 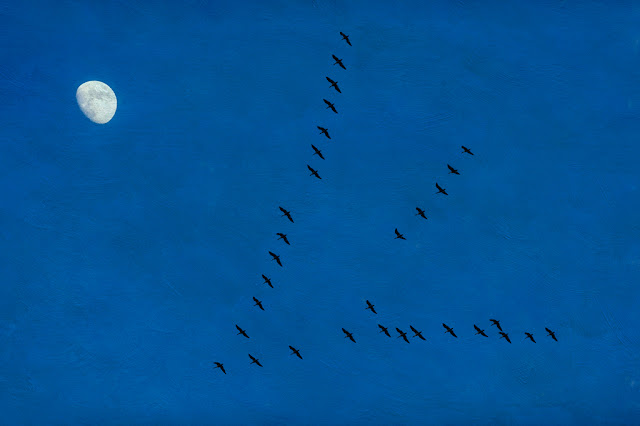 .......And the Canada Geese flew over as the moon was rising. I shot the geese, then shot the moon and blended the images together in Photoshop then added a little SnapArt3 and a layer of texture from Flypaper.
It was not such a productive day, photographically speaking but it was fun getting out in the field with friends!!