It's been a while since I made a "Big Camera" blog post so I'll try to catch up. I have had a pretty busy week since I began to feel better after my horrible reaction to some anti-biotics, but feel better I do, so I am thankful. Last Friday I conducted a day long workshop on iPhoneography at Chesapeake Systems a great Apple resource business location in Baltimore. It was great fun!
Saturday morning I met a group of photographers from the Digital Photography Club of Annapolis who had signed up for my Annapolis Harbor workshop exclusively for their membership.
After the workshop I drove to Service Photo in Baltimore to pick up my long overdue new camera the Nikon D4. Saturday afternoon, I spent unpacking, familiarizing and setting up the D4 for a practice run on Sunday to Washington, DC with a group of Baltimore Camera Club members.
Sony has a new card for the D4 called the XQD. When I put my old 8 GB Lexar card into the D4 and formatted it the screen said I would get 118 shots...where I was used to getting a bit more than that on the old D2X. So I put the new 16 GB HQD card in and it said I could get about 400 shots...so I went with that.
When we arrived in DC it was early morning around the Verizon Center and a fair amount of homeless folks were just getting moving..I shot the opening image above from across the street with the 28-300 (also new and testing that out as well).
We were heading to the American Art Museum to see the Annie Lebovitz exhibit. One of the members had set up a tour for us which was terrific.


Springtime in Washington is beautiful...there was a very large tree in spring green bud that caught my eye just outside of the Museum. I had to go across the street and shoot from a different perspective to capture the beauty of the tree against the sand colored stone of the museum. I wanted a clean background for the tree and from this perspective enjoyed the wrought iron fence as a bit of a foreground element.
After the tour we gave ourselves another 45 minutes in the museum to view more collections or just walk through. I chose to head out into the open space in the Kogod Courtyard at the museum where there are some pretty cool water scrims. I enjoyed watching the children run through the shallow scrims. As I was sitting down, resting my elbows on my knees to stabilize the camera, I made several shots of this child running through the scrims. I blended the shots together in PS to  achieve this image.

After leaving the museum we had lunch in Chinatown and then hopped on the Metro to head to the Smithsonian/Monument area. This shot of the metro underground was made handheld at 6400 ISO (that's why I wanted the D4) incredible ISO ability.
We wandered around the tidal basin, but it was crowded and the blossoms were all but gone due to the high temps on Friday and the rain on Saturday..so we made our way over to the WWII memorial and I chose to sit a spell watching people move around the fountain area. I spotted this adorable little girl in a princess dress and boots dancing around the side of the water fountains....imagine....how she must have felt skipping and watching the wonderful water display on a spring day from her perspective...if we adults went and danced around the fountains we would make people wonder about our mental stability, but the innocence of a child dancing with the delight of a perfumed spring day enjoying the discover of the water fountains was sheer beauty to me....oh to be so light~hearted!
I made a few shots from my seated bench with the 28-300mm at 300mm. 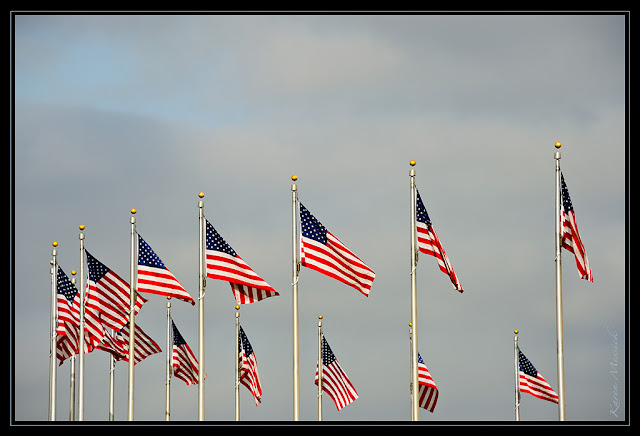 As we were heading back to catch the metro home, the light broke and the wind started to blow the flags around the base of the Washington memorial. It was a great day in DC!
When I got home I was very anxious to download the files.....but I had some reservations about how my laptop and software would or would not handle it.....first thing I found I had big files so I had to move some other files to download....OK that worked fine....then I tried to open the files....not so fine...Adobe said look for a new raw converter...so I went looking for one for hours to no avail....was going to call Adobe, but no phone hours until the AM, so I headed to bed.
This morning I connected with Adobe support and they said the raw converter for the D4 had not been released yet even in the Beta for CS6....SO I called Service Photo and asked them about that. Jack said Nikon Capture NX2 would open the files and then I could convert to tiffs....OK, I was doing that and Jack called back and said Adobe Lab had just released the 6.7 Raw converter update...OK....cool...but found out I had to have the latest CS5...
so I contacted Adobe and now have my Educator application in for a CS5 Download.....
hopefully they will send me the link soon to get back to a "Normal" workflow....

Now for the D4~ Very comparable in function, menus etc to the D2X so not such a huge leap in learning new buttons and menus, thankful for that. It has amazing ability to capture images at high ISO, and I am sure as I continue to use it will love even more of the new technologies built into the camera....so that's it. A day and a night of getting up and running with a new camera!
Now I have to do some real work!
at 6:11 PM