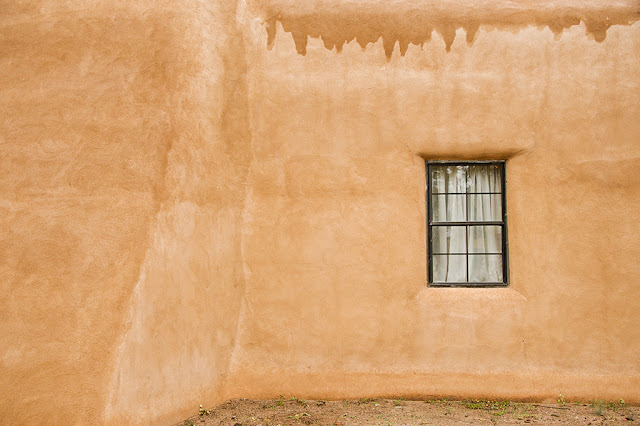 Last week was busy! After getting back from my New Mexico Photo Tour on Sunday, my Johns Hopkins class for beginning Digital photographers got started Tuesday night, I made an iPhone presentation at Lenox Laser, and conducted a field shoot in Fells Point on Saturday. In between, I have been working my way through a few images I made while in New Mexico. Abiquiu is a small community made famous in modern history by Georgia O'Keeffe. She chose to live there the last 30 years of her life before her health deteriorated forcing her to move three years before her death. On my tour we fit in a one hour guided tour of her Abiquiu home. I find that incorporating events like this enhances the photographers connection to the land through history ultimately enhancing your imagery. After lunch we returned to Abiquiu and it began to rain gently while we toured and photographed in Abiquiu with Dexter Trujillo as our guide. I made a few shots while walking the town. The opening shot here I made because I enjoyed the negative space created in the composition with the wet roof line, textured adobe and single window. He guided us behind the St Thomas Apostle Parish, where this shot was made, to show us remnants of The Old Spanish Trail. The Old Spanish Trail is America's 15th National Historic Trail. Abiquiu was the far distant outpost on the edge of civilization, at the time when settlers, traders, trappers and outlaws blazed this trail to the Pacific Ocean. Indian attacks, rough terrain, varying landscape and temperatures killed many. The Genizaro's of Abiquiu were very talented guides along the trail and those who'd venture would make their way to Abiquiu, wait for a group to form..and hire a local Genizaro. By the 17th century, Spanish peoples of Los Angeles craved the sheep and woolen blankets of New Mexico. The history of the Genizaro was shared by Dexter, as well as the faith and deep beliefs of the community. He opened the Morada for us to sit and share in the traditions of Abiquiu's people, as well as make a prayer for our journey. I will be going back next year for this great Photo Tour. If you would like to join me click here for the link to more info and registraton.