After making a stop in  Mullaghmore in the morning, I headed directly for the Dark Hedges in Armoy, County Atrim. I kept the pedal down but at the marked limits navigating more round-a-bouts than I desired and arrived in Armoy around 3:30. It was a little longer drive time wise than anticipated and by the time I arrived the weather had changed, it was a sunny afternoon. Upon arriving in Armoy, I looked for a spot to eat. Well I first sighted a pub and thought OK pub and food great unwind from a long drive and refresh. But noooo, this pub had no food. When I approached the door three men were kind of hanging in the doorway, and I asked about food. They said no food here, so I asked where I might find a place to grab a bite nearby and they said just up the hill...I asked a little more specifically letting them know I just motored from Sligo, was pretty hungry and needed a break from driving. Then they became curious of my mission, I said I was there to photograph the trees. "Ahh the trees." they said. I said, "Yes, you know of the trees?" and they responded, "Yes." So I asked them exactly how to get to Bregagh Road from there, if I wasn't going to get food at least I could get directions! Then the funniest thing happened, now all of them outside the bar standing on the sidewalk talking to me, they began to disagree with each other on the best way to get to the trees. It was hilarious! Well maybe you had to be there. I just watched them and smiled. Then one of them said, "Hey, just follow me I'll take you there." Now that was interesting, quickly through my mind went...what if....this....is....well who knows...but as he walked across the street to get into his black 2003 VW Passat V6 all motion, car, which is exactly the car I have at home, I decided that was a sign that it was OK to follow him. So he quickly navigated through the town and within 5 minutes we were on the road with the trees. I thanked him tremendously and he said, "Ahh tis nothing."
Now I still needed to get some food and refresh a bit before doing some work. So I drove to the end of Bregagh road made a right turn and then turned down the Grace Hill golf course road. Golf courses always have club houses, restaurants and food, right? Jackpot! It was a super golf course and yes they had a restaurant. So I went in and ordered lunch, even though it was getting late, now about 4:00pm they were happy to serve me. I went to pay for my tab using my Euro's and they politely told me they did not accept them....well of course not this was the UK, should have known that by all the Brit flags flying, so I charged my lunch instead, no problem. It was just the break I needed. I was ready to do my best thinking and get out there and make photographs. The walls in the restaurant had many artists renderings of the Hedges and I made the observation that the best were made looking north up the lane, so that is how I decided to position myself when I got out there. I made exactly 37 shots in between jumping in and out of the road to let cars pass. I wanted the center of the road as my point of composition. I walked up and down the road making small tweaks in how I composed each shot, looking for how the trees balanced and how the light was woven through them. These four shots I processed in Photoshop using filters from Nik Silver Efex Pro and Color Efex Pro. More from the road in Ireland tomorrow..... 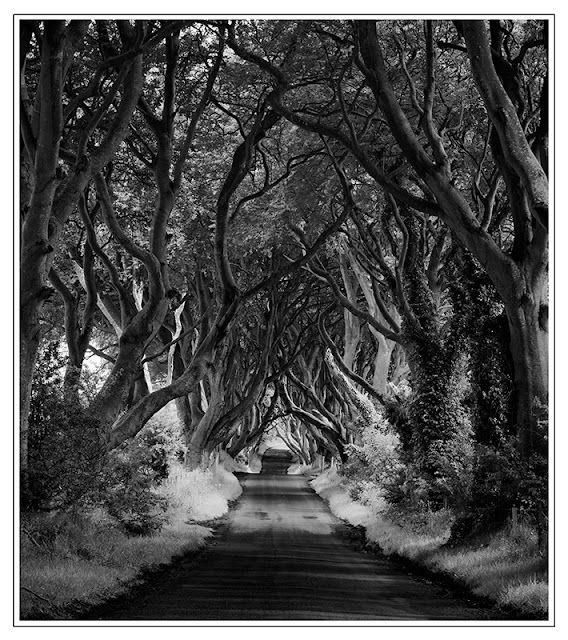 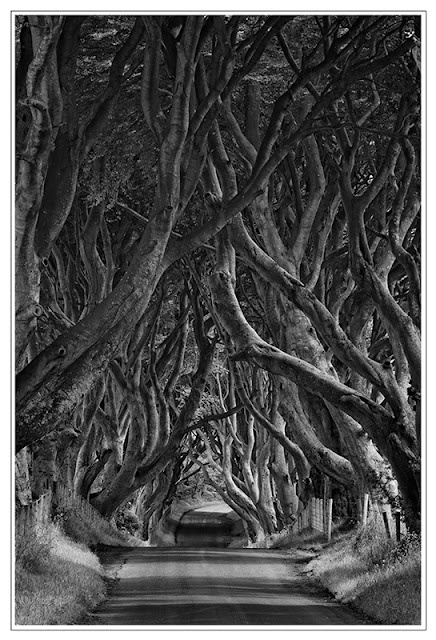 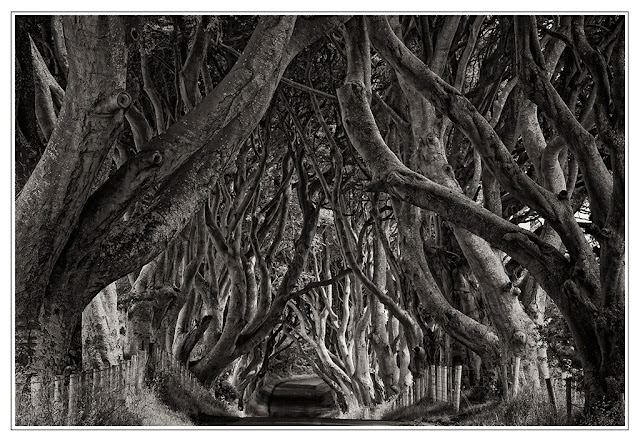