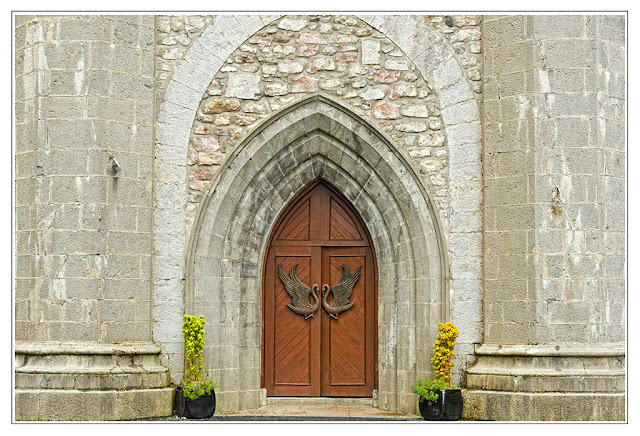 This was a transition day again, changing locations, checking out, and it was the beginning of the final leg of my adventure. I had hoped to get out and make a few shots of the castle but it was raining, so I walked around the grounds in my rain slicker and hike boots and made a few iPhone shots instead of getting all my big gear out.  My plans were rearranged for the sites I had wanted to see around Sligo, due to my trip north to the Dark Hedges.  I missed some of my objectives near Sligo, one of which was visiting a favorite poet of mine,  W. B. Yeats burial ground. He is buried in the graveyard of St. Columba's Church of Ireland church in Drumcliff . I wanted to at least get to this location so I headed north after checking out of the Markree Castle.
When I arrived at W. B. Yeats final resting ground the rain had stopped. I walked past the church doors and into the cemetery where his grave lies simple among the others. His grave marker bears the last lines of one of the last poems he wrote. It was an interesting place and lo and behold there was a grave digger there with a spade in hand caring for an existing grave, by scraping off the heavy moss. It was as if he had stepped out of the poem that day. The poem follows here...... 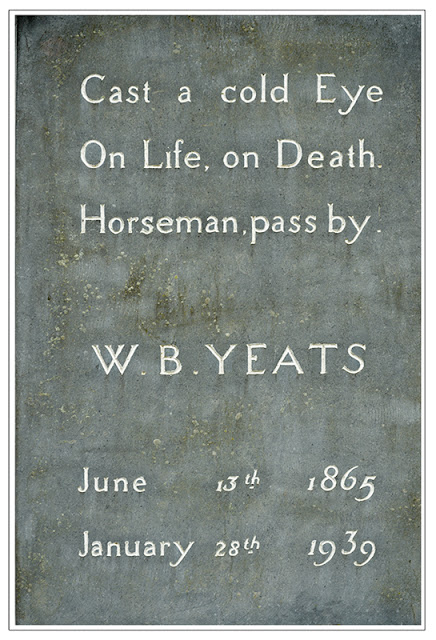 I
Swear by what the sages spoke
Round the Mareotic Lake
That the Witch of Atlas knew,
Spoke and set the cocks a-crow.
Swear by those horsemen, by those women
Complexion and form prove superhuman,
That pale, long-visaged company
That air in immortality
Completeness of their passions won;
Now they ride the wintry dawn
Where Ben Bulben sets the scene.
Here's the gist of what they mean.
II
Many times man lives and dies
Between his two eternities,
That of race and that of soul,
And ancient Ireland knew it all.
Whether man die in his bed
Or the rifle knocks him dead,
A brief parting from those dear
Is the worst man has to fear.
Though grave-digger's toil is long,
Sharp their spades, their muscles strong,
They but thrust their buried men
Back in the human mind again.
III
You that Mitchel's prayer have heard,
"Send war in our time, O Lord!"
Know that when all words are said
And a man is fighting mad,
Something drops from eyes long blind,
He completes his partial mind,
For an instant stands at ease,
Laughs aloud, his heart at peace.
Even the wisest man grows tense
With some sort of violence
Before he can accomplish fate,
Know his work or choose his mate.
IV
Poet and sculptor, do the work,
Nor let the modish painter shirk
What his great forefathers did,
Bring the soul of man to God,
Make him fill the cradles right.
Measurement began our might:
Forms a stark Egyptian thought,
Forms that gentler Phidias wrought,
Michael Angelo left a proof
On the Sistine Chapel roof,
Where but half-awakened Adam
Can disturb globe-trotting Madam
Till her bowels are in heat,
Proof that there's a purpose set
Before the secret working mind:
Profane perfection of mankind.
Quattrocento put in paint
On backgrounds for a God or Saint
Gardens where a soul's at ease;
Where everything that meets the eye,
Flowers and grass and cloudless sky,
Resemble forms that are or seem
When sleepers wake and yet still dream,
And when it's vanished still declare,
With only bed and bedstead there,
That heavens had opened.
Gyres run on;
When that greater dream had gone
Calvert and Wilson, Blake and Claude,
Prepared a rest for the people of God,
Palmer's phrase, but after that
Confusion fell upon our thought.
V
Irish poets, learn your trade,
Sing whatever is well made,
Scorn the sort now growing up
All out of shape from toe to top,
Their unremembering hearts and heads
Base-born products of base beds.
Sing the peasantry, and then
Hard-riding country gentlemen,
The holiness of monks, and after
Porter-drinkers' randy laughter;
Sing the lords and ladies gay
That were beaten into clay
Through seven heroic centuries;
Cast your mind on other days
That we in coming days may be
Still the indomitable Irishry.
VI
Under bare Ben Bulben's head
In Drumcliff churchyard Yeats is laid.
An ancestor was rector there
Long years ago, a church stands near,
By the road an ancient cross.
No marble, no conventional phrase;
On limestone quarried near the spot
By his command these words are cut:
Cast a cold eye
On life, on death.
Horseman, pass by! 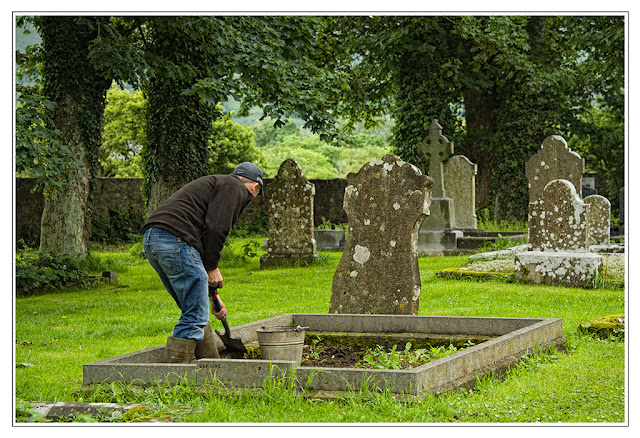 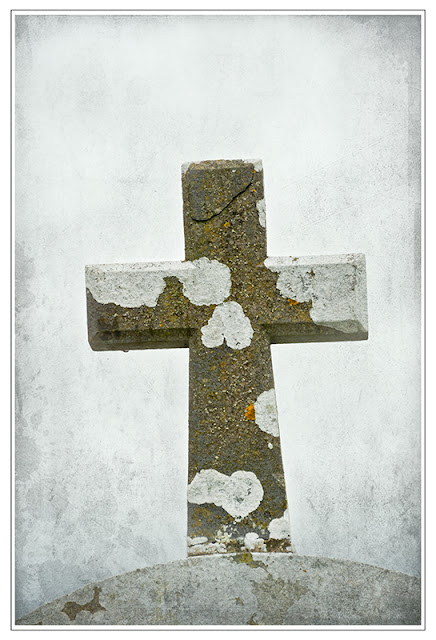 After making this stop I turned south toward Roscommon and it began to rain like mad, so the rest of my outdoor adventures were cancelled, instead I rambled the countryside making the odd shot when I could. After driving around Ireland for almost ten days I became comfortable listening to the radio and driving too. I enjoyed some of the talk radio programs which detailed the sadness of the Irish farmers this spring due to all the unusually heavy rains which had spoiled many of their crops and cost them economically.
With that thought in mind I passed a farm with the equipment standing in a muddy field and made a quick shot. 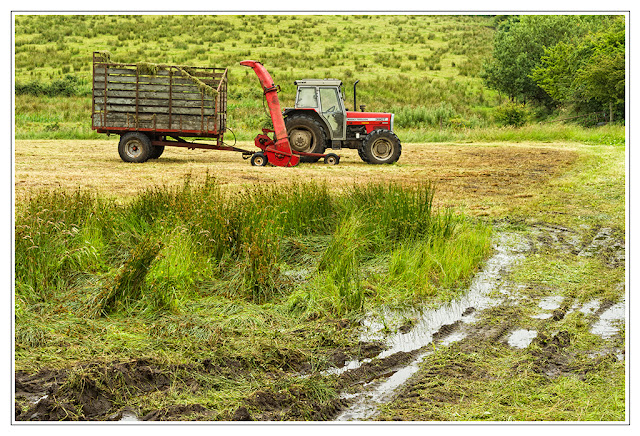 And further down the road as the rain clouds hung low over the hillsides, I noted that lakes had begun to swallow up the small trees that normally would be dry on their banks but now had their trunks fully engulfed by the overflowing lakes. 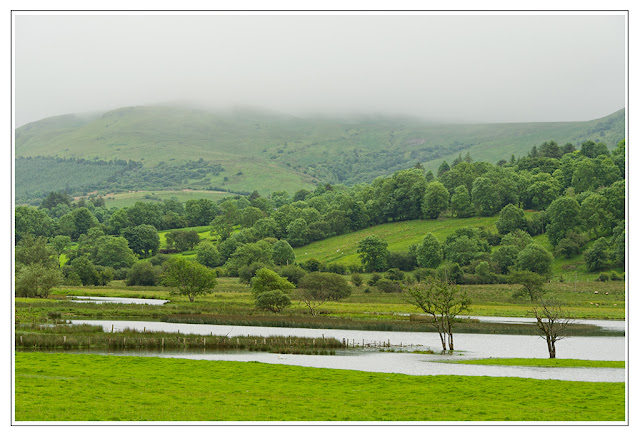 Rambling on in the rain on the back roads, I had my very first real "road" scare. As I came around a blind curve (all back roads in Ireland seem to have blind curves) two cars were coming at me, at a fairly fast pace and  two feet over the center line. I had little time to think but moved right as much as I could, there are no shoulders on these roads either...just rock walls out the passenger side door. Since it had been raining so hard the side of the road was mud and when the soft ground met my tires it caused the car to fishtail a bit which I quickly corrected for and then the other cars were past. Whew!!! So I caught my breath, said to myself "OK, that's a sign, slow down and get to the hotel!"