After checking out of the Abbey Hotel in Roscommon, I made my way north again backtracking a bit to Carrowkeel a Megalithic Cemetery in the Bricklieve Mountains, before heading back to Shannon for my final night in Ireland. "Carbon 14 dating places the tombs at between 5400 and 5100 years old, so that they predate the Pyramids on Egypt's Giza plateau by 500-800 years. Carrowkeel is one of the big four passage tomb cemeteries in Ireland (the other three are Brú na Bóinne, Lough Crew, and Carrowmore)." This was on my do not miss list!
It is well marked off the highway on a brown sign. The road winds its way up a steep hill and the small brown directional road signs become lost in the trees. I drove past one sign. After barely catching the sight of the sign as I passed it, I turned around and proceeded up a small two track farm- like road, until I came to a farmers gate. The sign on the gate said to please close it after passing through and so I did. Driving maybe a quarter mile further on the stone path, I came to a place marked with a sign that said no vehicles beyond this point. OK..I pulled off and shut it down. Now I was the only person there! No more signs so I followed the farm road down hill on the other side of the mountain hoping there would be some signs that indicated where I needed to make my climb up hill to the tombs.There is no touristy stuff here, its just the real deal! 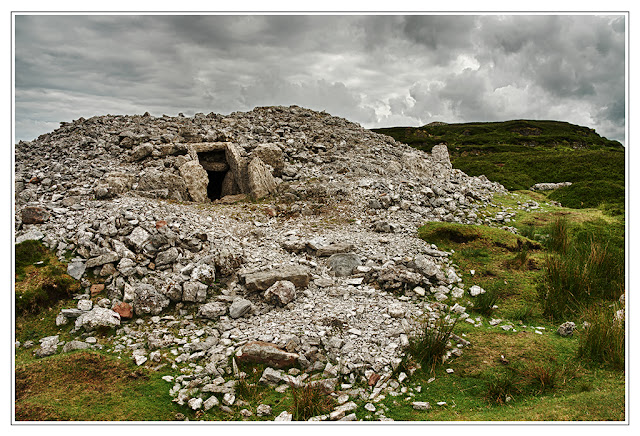 When I arrived at a sign that indicated no more access, I made my way up the hill following what appeared to be a worn path through the hillside. After a steep ascent through boggy hills I saw the first tomb. Amazing! To think people over 5000 years ago buried their dead here, as close to the heavens as they could get them! Wow and then to think about the construction of these tombs and the labor, strength and tools that they needed to actually construct them...Amazing! I stood there for several minutes taking in the view. Then I walked on further to the second tomb scanning 360 all the time...trying to get a sense of how to capture the feeling of the place. The storm clouds were gathering but I didn't care I was not rushing off. After being up there for a half hour or so a few more people came along that had found their way up. One Irish couple saw me taking pictures with my tripod and began a conversation. He asked me if I was going in. To which I politely replied, I don't think so! He said, "Why not, tis what we came here for tisn't it?" Well I said yes I guess so, he said,
"Here, I'll go in first and help you." OK now that's interesting! Then he said his Border Collie wouldn't come in, but that she would go anywhere he would, just not here. He said it was because of the spirits! OK now that was even more interesting. So in he went after twisting a bit to get between the tomb stone and the entryway. So I said OK...leaving my camera outside, I twisted myself to get into the doorway and made it. Once inside the tomb ceiling is high enough to stand up in. Again I stood inside with amazement. He explained the three chambers and the construction a bit. Amazing!
Now getting out was a bit more challenging having to press my back against the front stone and push up backwards. I came out a bit dirty but enlightened!  I was grateful for his help and guidance. 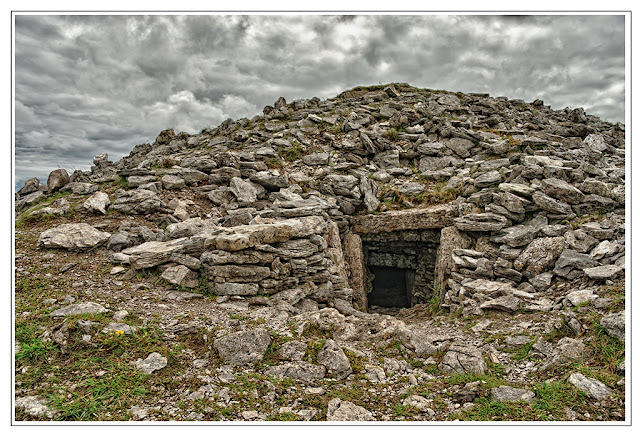 Only a few of these tombs are still accessible as they have collapsed inside.  After making a few more shots I made my way back down hill. I could have spent all day exploring the hillsides there as there are many more tombs one can see in the distance, but I had to go.
SO back down the hill to the farm road and out. Well almost...there were some cute sheep that stopped me 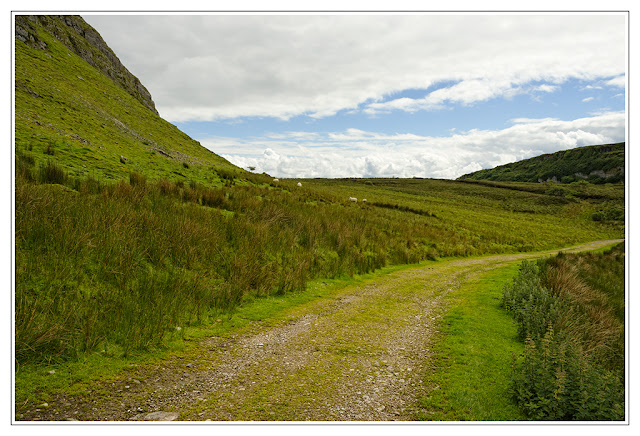 Now I swear these guys are so cute and they never stop ba baing...its  make you want to just ba back.....and so I will Baaaa Back! Its confirmed!!! I will be leading a Photo Tour in partnership with Peter Cox in the south of Ireland next spring! Ireland captured me heart! 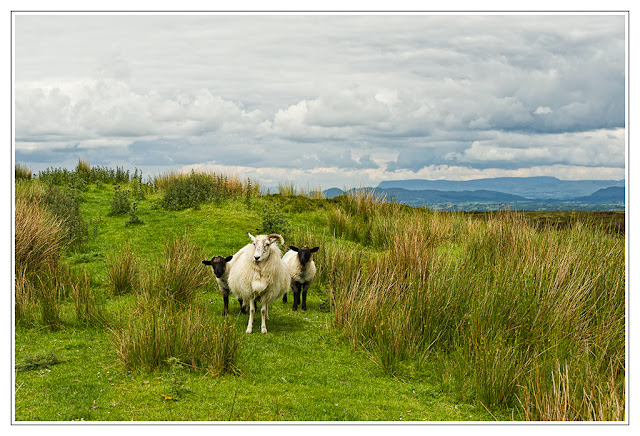 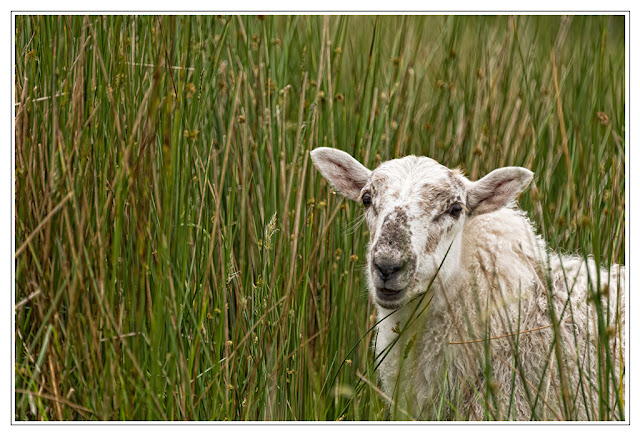 After driving back down hill I stopped in a local pub for a  late lunch. I sat at the bar, next to a local. I chatted with him and he asked what I was doing there, so I said I visited the tombs, and I asked him if he had ever been there and he said no. I told him I crawled in one of the tombs to which he replied, "You didn't see any badger or fox in there did you, they would take a fine bite out of ya." OK now I know why the Border Collie would not enter the tomb....it smelled the badger or the fox and had better sense than its owner and I! It was a great trip to a magical land.....and so ends the blogs of my "Ireland Adventure". For those who followed me along the way, thank you! I hope you can make it to Ireland one day!