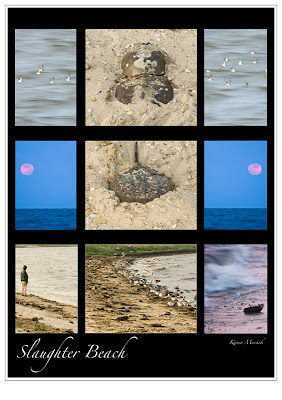 Yesterday after doing some work around the beach house I headed north to meet Annette, Don and Chuck for dinner and then on to Slaughter Beach for some photo fun! I never get tired of photographing at the beach, there is always something and there is always changing scenerey. The changing tides, the changing atmosphere, and the changing patterns of life at the shore always offer something if you go out and look! Don exclaimed how very different the scene on Slaughter Beach was after dinner, as opposed to the scene he saw in the late afternoon...and that is the magic of the shore! It is never the same! We walked out on to the beach among the dead, dying and egg laying crabs as the surf rolled and the northeast wind whipped. The surf was unusually rough on the bay due to the shift in the wind and a cold front that was blowing in, so the gentle creeping onto the shore the crabs usually do was not to be seen. Instead the crabs were being tossed and broken apart from their ritualistic coupling and dragging to shore. A few  other photographers showed up for the event, it was nice to met Jose Hernandez who had traveled from Virginia, but after looking at his blog, travel is no problem for Jose! I also met another photograher who was able to grab, what I believe was several Red Knots in flight. I was just looking around as I saw the group pass and thought they were Red Knots as the light lit their bellies and the pointed wings made me think they were. So I watched them fly by, but missed a shot......I think I was in the zen mode just looking at the scene.. Later he showed me his shot and it was awesome, and I am pretty sure they were the endangered Red Knot, after seeing his shot. It was a pretty cold shore line and we shot what was there until the moon rose. We were cold and wet from the heavy dew in the air, as was our gear. After saying our goodbyes, I drove back to the beach house while Annette, Don and Chuck headed back to Baltimore. I processed a few images  last night, but did not post any.......they needed to ferment. When I was waking up this morning, I was thinking about the shot I really liked the most, a pan of Sanderlings in flight, juxtaposed a crab shot. Then I thought about the triptychs I had been seeing some other photogs post like John Barclay on his site and Teri Lou Dantzler had recently posted on Facebook; but I wanted more..to tell a story...and Don had mentioned a poster that Bombay Hook had been giving away with shore birds depicted..so I thought that's it a poster of images!......You just never know where an idea generates so here is my idea of the evening I had last night on Slaughter Beach.......... 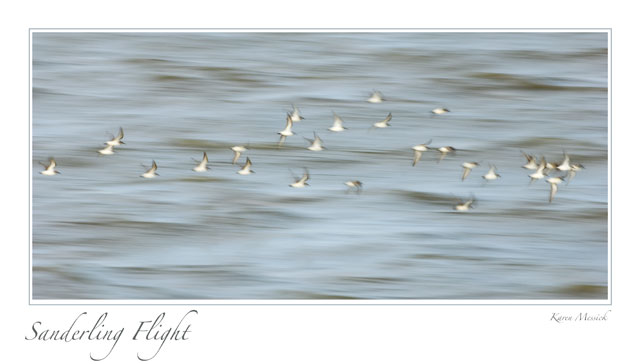