This morning I led the 5th week of class, field shoot at Hopkins Campus. We had a great group eager to learn more about using their cameras and getting exposures right in camera. It was a very windy morning, and so far it has remained that way all day. The yard is full of leaves, sticks and twigs blown out of the trees, which I had to gather before mowing the lawn. Then when I came in I went to some image files and began to think.Trees!

Ahhhh trees, let me go back to that tree image I liked but didn't love and didn't post right away because I didn't love it, but I did love something about it......the way the light was striking the trunks, the arrangement and the angle the trees were growing on the mountain; so I revisited that image.

I had already made the B&W conversion as you see here in the "Original Trees" image, but I think you will agree, that image needed more......So while working with a student today, I was showing her how to make an image overlay in camera and I thought, ah, maybe that's it. I had taken a shot of a mossy rock, Chuck spotted in Tennessee and when he showed it to me I said, oh, that's a great texture overlay image, so I made the shot, as you see here, the "Mossy Rock". I had already made that conversion to B&W and put it back in the file for textures to draw on when I thought I had a match. So today, I pulled up the original tree shot, and the Mossy Rock shot and went to work on creating the final "Trees" image, which now I like very much. I rotated the mossy rock shot from a horizontal to a vertical to match the orientation on the trees, made a layer and used the multiply blend mode and reduced the opacity until I was satisfied with the layered image. Then I made an adjustment layer and brightened the overall image. After that I applied a mask to the adjustment layer and reduced the brightness in selected areas of the final image..........So sometimes you have to let an image percolate, like lots of other things in life. 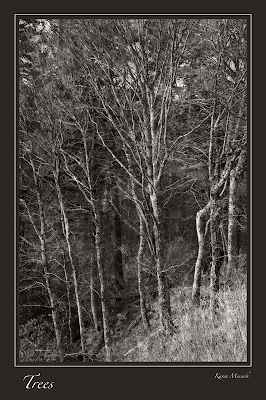 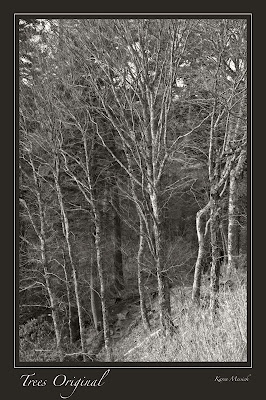 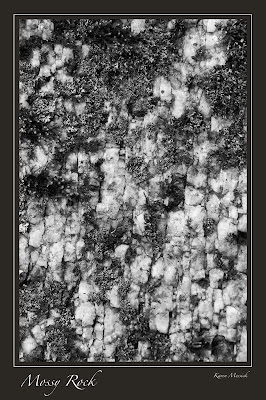