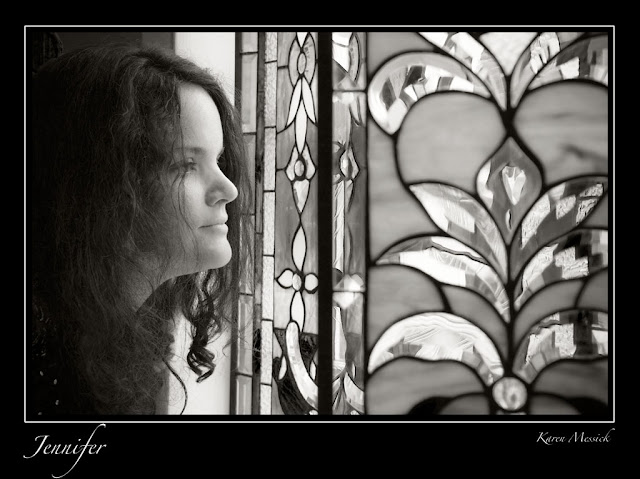 Sunday was the last day of the Real People, Real Places workshop with Steve Gottlieb in Chesapeake City. We started around 9:00 and had some class time, watching demonstrations and listening to ideas. Capturing people in real places is challenging. It does require you to engage with them if you are not shooting with a long lens from a distance. This engagement, creates stories! So Steve had many stories to tell about his experiences capturing images over time of famous and not so famous people. All very fascinating and filled with great tips. We hit the streets of Chesapeake City at 11:00 for an hour and a half, challenged to come up with more people shots, employing some of Steve's ideas. The first shop I went into was called Dragonfly. There I met Jennifer, the daughter of the owner's. The shop is fabulous and full of wonderful items. I admired the stained glass on display. (Her dad makes amazing stained glass works in an old bank building a block away.) My eye caught the soft morning light, coming into the shop from the outside. Steve said all the shop folks are aware and willing to participate in our mission of creating people shots, so I asked Jennifer who was very pretty, to come around and look wistfully out the window, between the two stained glass panels. I made a couple shots and felt I had captured the image I had in mind. Here I processed both in B&W and color. 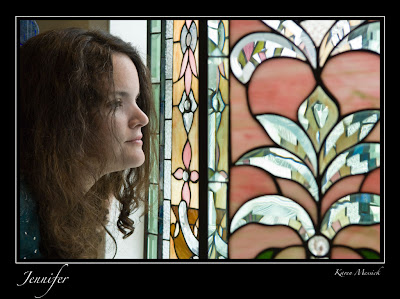 The town Hall was hosting an exhibition of local artists work and I was intrigued my the works created by Maggie Creshkoff from scraps.  Check out her site she is a fabulous potter as well!
Steve had talked about connecting people in the images, to what they do and I thought how much fun would it be to capture her face in front of a large work of Face Art she had created. So I asked her if I could and she was a great participant! We had to get a step stool and Steve also suggested the telephoto here, so I wanted this shot and went back to the car and got my telephoto and tripod! I hope she likes the shot! 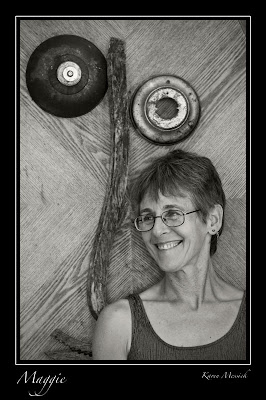 Wandering around town, I spotted two fellows sharing a bench. I went into a shop looking for more opportunity, and when I came out they were still there. So I walked across the street and asked them if they were
Waiting on a Woman...and would you believe they were! They had been friends for 35 years! Their wives were doing some shopping, so I asked them if I could give it a try and get some shots of them. Well, I only had a mid range zoom with me, and Steve came down the street and asked where my telephoto was, that would be the better lens choice he said......OK, well it was in my car; I can only carry so much@! He suggested then that I shoot them from the side angle and in fact it was much better than the shot I had composed...turns out they live in Lancaster, PA. Mike is involved with a commercial cleaning business called EVE. 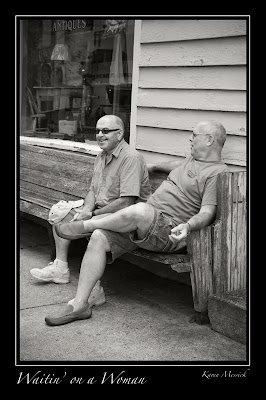 Steve also wanted a group shot and demonstrated how to arrange folks at different levels, separating colors and finally adding some animation...all fabulous tips for shooting a group of people....and so we did! It was a fun workshop and I learned a lot! Now if I could only do it! And yes, for you Baltimore folks, that is Rudy Miller, former Channel 11 News Anchor, she was a workshop participant too. 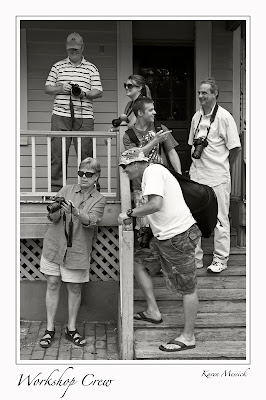 So, those are my stories from the day! I met some great folks and some very talented people.
at 11:47 PM

Email ThisBlogThis!Share to TwitterShare to FacebookShare to Pinterest
Labels: People