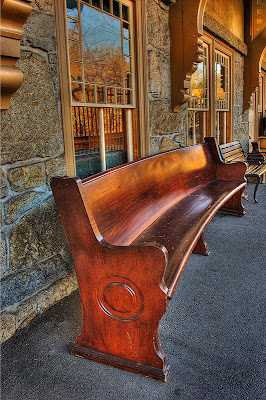 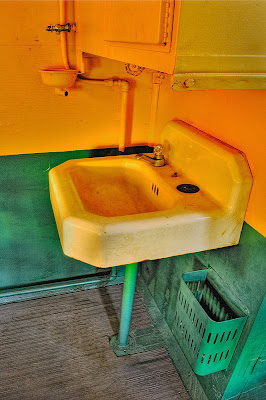 Carl asked me join him for lunch in Ellicott City. I had not been there for quite a while and it used to be a place I frequented almost weekly when I live at 6216 Frederick Road, 38 years ago; Oh that's scary. The high water mark for the flood in 1972 is still the highest on the old train trestle and I remember watching the waters rise that day and consume the lower half of the old town. Seems like yesterday!

We enjoyed a nice lunch at Cocoa Lane, its still there too, but under different management I am sure and the French Onion soup and spinach salad I used to enjoy was gone from the menu but the food was great and I enjoyed good conversation. Carl brought the HDR book by Ferrell McCollough, because I have expressed an interest in the HDR process. Several members at The Baltimore Camera Club have produced some wonderful images with that technology, and I have been watching Tony Sweet compose and groove on the HDR image creation through his blog. I had down loaded the trial Photomatix program some time ago, but never had created some intentional images to work with.
I had thought several days before Carl asked me to join him for lunch that Ellicott city with its old and rather eclectic buildings would be a good subject choice, so I had my gear with me for some trial shots after lunch. Instead I went into the oldest standing train station in the US and did some shooting out back, these are the first HDR images I have made. I bought the Photomatix program tonight and thanks to Tony Sweet used his discount code and got 15% off. Tony also has a great CD out now on HDR imagery using the Photomatix program. I also for the first time used auto bracketing on my camera.

So, these two images I "played" with tonight. In the sink image I did some more work in Photoshop with some artistic filters, and the bench shot was just a straight HDR tonemapped and then applied some curves and levels in Photoshop. The bench shot I like the best, for the amazing reflections and light as well as the interesting curved bench as a subject.
at 9:36 PM