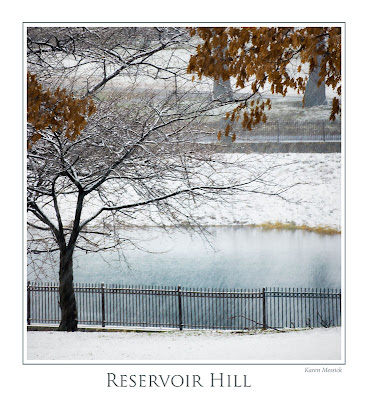 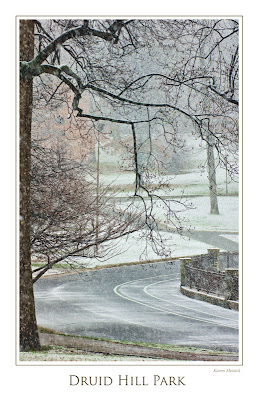 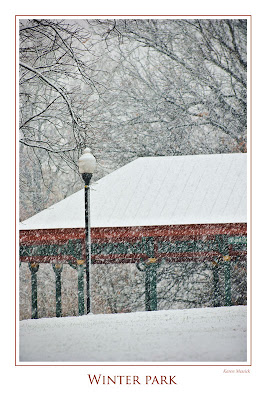 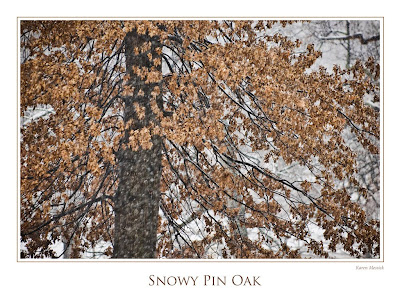 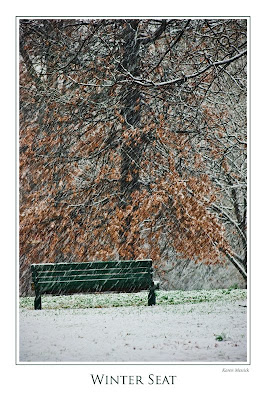 Yesterday, after the auto show, Annette and I headed to Druid Hill Park. It was snowing like crazy and we both wanted to make some pictures of the snow falling. Since Druid Hill has several covered open spaces, I suggested we head there so we could be under cover and shoot out into the falling snow with out getting our lenses and camera gear wet.

Druid Hill Park in northwest Baltimore, Maryland, ranks with Central Park in New York, begun in 1859, and Fairmount Park in Philadelphia as the oldest landscaped public parks in the United States. Druid Hill Park is a 745-acre (3.01 km2) urban park.[2] The land was originally part of "Auchentorlie", the estate of George Buchanan, one of the seven commissioners responsible for the establishment of Baltimore City, included 579 of the 745 acres (3.01 km2) that comprise Druid Hill Park today. Renamed "Druid Hill" by Nicholas Rogers, who married Eleanor Buchanan, it was purchased in 1860 by the city of Baltimore from Lloyd Rogers with the revenue derived from a one-cent park tax on the nickel horsecar fares.[3] Druid Hill Park was inaugurated by Baltimore Mayor Thomas Swann on October 19, 1860. It is listed on the National Register of Historic Places.
The park was designed by Howard Daniels, Baltimore Park Commissioners' landscape designer, and John H. B. Latrobe,[4] who designed the gateways to the park and the alterations made to the early-19th century Nicholas Rogers mansion that already stood in the site. George A. Frederick, the very young Baltimore architect who won the commission for Baltimore City Hall in 1860, provided designs for architectural features in the park. Among Frederick's playful structures for Druid Hill in Moorish and Chinese styles is the Chinese Station erected in 1864[5] and the Moorish Station,[6] which were stops on a narrow-gauge railroad that once wound through the park. The "Mansion House" now functions as the main administration building of the Baltimore Zoo
Like Central Park, Druid Hill was at the northern edges of urban development at the time of its establishment. The northern end of the park has never been designed as parkland, and stretches of it are fenced off. The southern end of the park was a popular destination for city dwellers for a number of decades. The park features a number of waterways, most notably Druid Hill Lake, which began construction in 1863 and remains one of the largest earthen dammed lakes in the country. With the advent of automobiles, the park's many winding roadways became popular with car dealers who took potential buyers there to teach them to drive. The park also served as an encampment for the National Guard during the riots of the 1960's.
at 5:26 PM