Day 13 On the road to Galway Aughnanure Castle 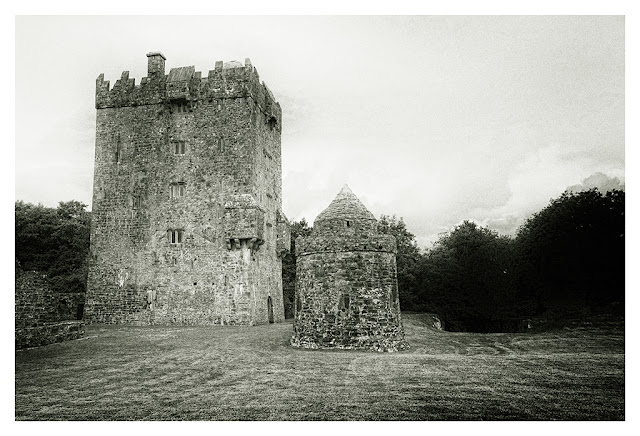 After leaving Ballyvaughan I was once again on the "Castle Trail" today's stop was at the Irish National Monument Aughnanure Castle. It was a "soft" day with rain spitting and I knew tripods were not allowed so I hand carried my camera fitted with a 28-300mm lens. Before leaving for Ireland I had the pleasure of visiting with the owner of Lenox Laser. They make microscopic holes in materials with a laser device. They also make pinhole caps for DSLR cameras. I was gifted a cap for my camera and brought it to Ireland with the idea that these old castles would make great subjects for pinhole images.
Only one problem...no tripods allowed and lots of wind and rain which might seep into the camera through the pinhole....so instead I decided to use Nik's Color Efex Pro pinhole filter to begin the processing of these images. Then I tweaked the effect to get the results I wanted and toned the  images. There was no color in the sky, the grass was green of course and the castle was stone colored so I thought they would make for great conversions with this effect.
As I entered I continued to be amazed at how one lived in these structures and how they were built. This one had four floors. three of which supplies were hauled up narrow steps with a good rise. I could not imagine hauling firewood to heat such large spaces. The fireplace was grand consuming fully half a wall in  length with the mantle taller than 5 and a half feet.
All the shots here were made at 6400 ISO f8 1/80 sec. between 40mm and 60mm focal length.


"Near the south-eastern corner of the outer bawn, stand the remains of the east wall of the once thatched Banqueting Hall. The remainder of the hall fell with the collapse of the natural arch over the river on which the Banqueting Hall had been built. The one remaining wall contains two windows beautifully decorated inside and out with stone carvings. The sofffit of one of them bears soe stiff carvings of grapes, suggesting that wine was quaffed there by the O'Flahertys, and particularly by Morogh, who may have imported it from France and Spain through the city of Galway. "
* From the Irish Heritage site.