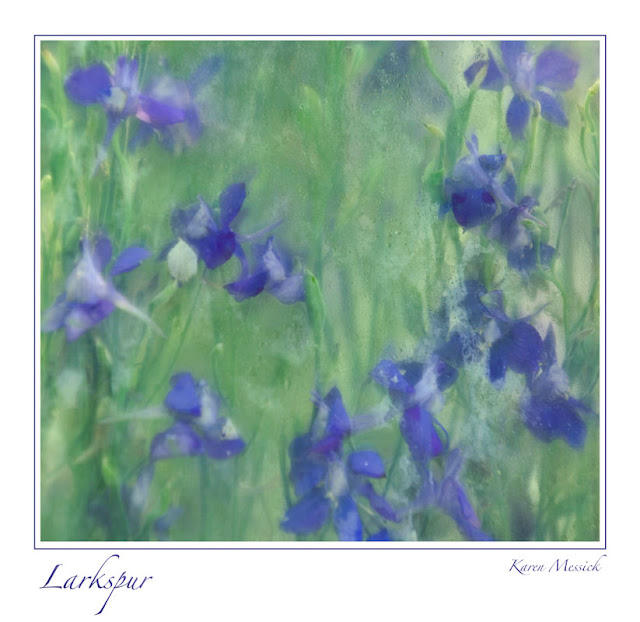 The Talmar Gardens and Horticultural Center's home is located in the Cromwell Valley Parks area of Baltimore County. Even though it was a blazing hot summer like (it is still spring isn't it?) morning we had a great group for the workshop. We worked the Willow Grove, old stone barn and surrounds first and then headed to Sherwood Farm and worked the Manor House and farm. It was about 10:15 when we headed to Talmar for a few parting shots of the area. I was working with Lou on making some multiple exposures of daises in the meadow grasses. His camera only made a three shot multiple exposure, but he had the ability to do an in camera image overlay, so we made two, three shot multiples and then used the overlay function in camera to get a unique image with more shots. He had lots of fun with that idea and did quite well!

The blog image I shot yesterday when I was planning out today. It is shot through heavy plastic in the cold frames...the larkspur filled one frame and the humidity had created some water drops inside. I loved the scene for its already impressionist feel...so I worked it a little more today in post processing to get the look I wanted.."the one I felt when I saw the scene". I don't think there is a sharp edge anywhere. To get this look I made 3 or 4 layers from the original shot and versions of the image and then blended the layers. I actually used some PS textures in the artistic mode, from Glass Ripple to Texture...to smudge and then added a layer of the straight shot and reduced opacity.....I guess one could love it or hate it depending on your preferences! ; - )
at 10:27 PM

Email ThisBlogThis!Share to TwitterShare to FacebookShare to Pinterest
Labels: Impressionism