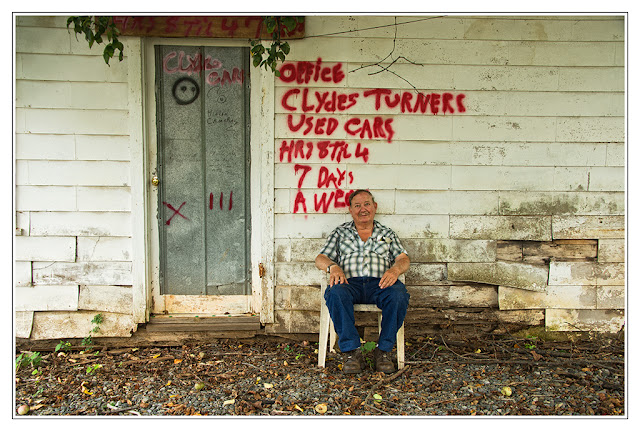 Life in the end is just a story! Some make for good stories...this is one of them.
I headed south to Martinsville, Va. to meet my high school sweetheart who I had not seen in 44 years. After a day of recollections and reunion joy, he returned to Madison, NC for work.
I had planned a few days to scout around the VA country and try to get in some shooting. Mabry Mill was on the shot list and I went there and made a few shots, but as usual, my photo "rambles" always end up being the most fun and the most interesting! They way I do them......turn right, turn left and just see where the road goes...of course down here in the mountains its a little easier to get lost with no signals for the GPS on my iPhone, so I didn't get too far astray....then I saw some great rusty cars. I brake for rusty cars! I pulled into the gas station across the road from where the cars were sitting thinking I would ask before I just walked on over and started shooting. Turned out the three "country boys" in the station said it was not owned by the station, instead by a man up the street, who keeps a pretty close eye on them. I asked if they thought he would mind, and they said probably not if I shot them from the street....then they said he probably wouldn't mind if I went on there either, he just might try and sell me a CD with songs about him on it. I laughed. So then I asked if I could park the jeep on the gas station lot. They said "Sure."
I put my hike boots on and grabbed my gear and headed across the road. Now I kid you not I had not set but ten feet off the road when I heard a man say "Hey what are you doing over there?" as he walked toward me with his dog Sandy. Sandy was sweet, not even one bark, not intimidating and was happy to see me. So I petted Sandy...He said that dog saved my life, she pulled me out of a hole....and he pulled a folded piece of paper out of his shirt pocket and showed me a song he had written about the event.
After reading it and exclaiming how lucky he was was and what a great dog Sandy is, I said "I was just hoping to take some pictures of these great rusty cars." He said "what are you gonna do with those pictures? You gonna sell them? Your not one of those pickers are you?" I said "No they are for my personal pleasure and I am not a picker." Then he tried to sell me a CD for $8.00 that some local musicians had made with his old cars on the cover and a song about him just like the guys in the station had said.
I said I didn't need a CD and I really didn't need any pictures! So he backed down..on trying to sell the CD. I started naming the cool old cars he had on the lot and he "said you know you cars don't ya?" I said "yes I love them," and then I showed him I wasn't going to take pictures of entire cars, by taking a shot of the rusty emblems and showing him the image. He was worried that someone might come steal them if I did. He told me he shot a man in the butt who was one night trying to steal one. Then he told me he was the Mayor of this little town and he was famous, that he had sold millions of dollars in cars. Then he told me he was Baptist and he showed me the key ring he had in his pocket with a dog tag KKK. OK well, now, I am thinking I am in the Deep South! And I never met anyone who admitted to that! WOW...he said he was 76 and he had been mayor for over 50 years. OK...Then he said make all the pictures you want, I got some things to do. So I made some pictures....the story continues after these few pics.... 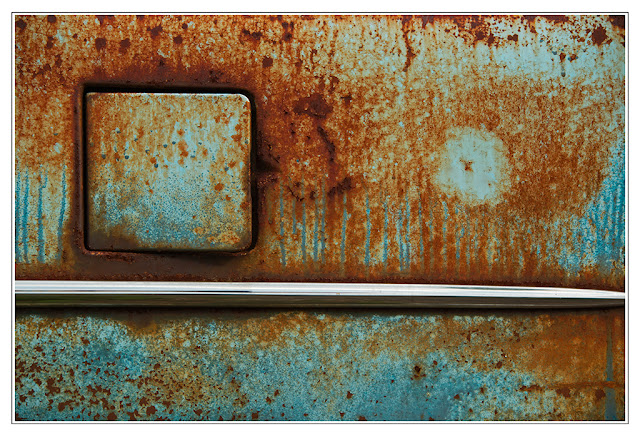 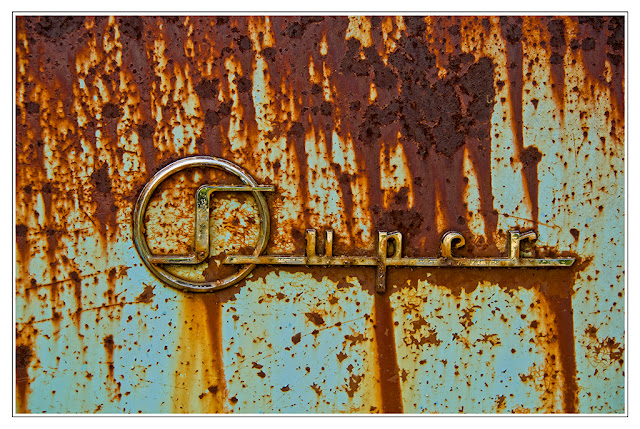 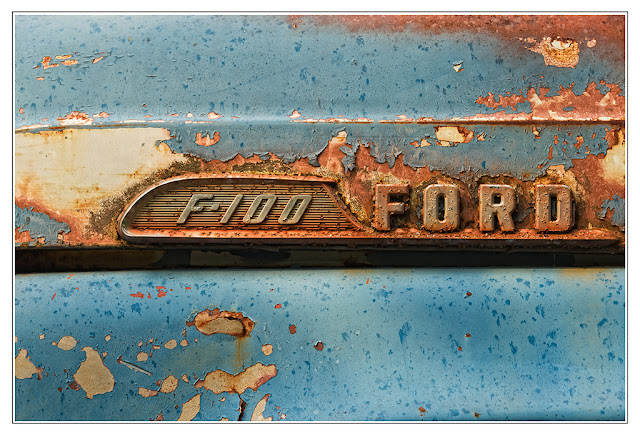 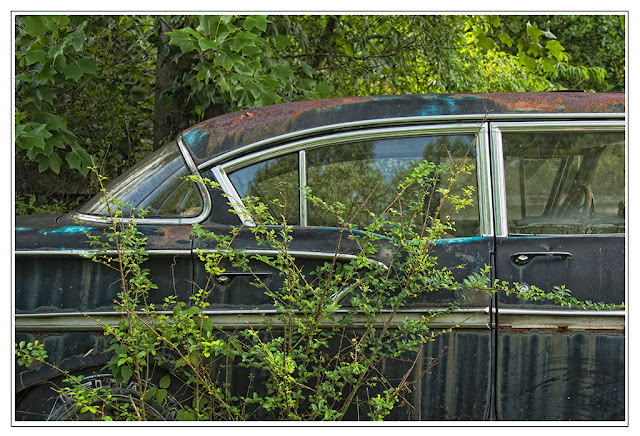 Now it was a blazing hot day and just making a few pics was work! I was wading carefully through the weeds and around the poison ivy that had grown all around the cars...so I was a bit reserved about getting any closer. Then I heard him come back. He started talking again and I felt obliged to converse. He said you should see my store you would love it...said he only had a seventh grade education and he had done pretty well. I said "OK where?"...and he walked up the hill around some trees and much overgrown vegetation. That's when I saw the possibility for the opening image. I said "Will that chair hold you?" He said "Of course!" I said "OK, can I take your picture with you sitting in the chair?" He said "Sure" and walked over to sit down. I made a few shots and went on to his "Store." At this point I said I wanted to put the camera and tripod in the car as the store looked awful small and I didn't want to knock anything down. So I came back and he opened his store. Then he showed me all kinds of old pictures and signed autographs amid the debris and collection of junk in the 10x10 store front...He said "How about a jar of honey..this is the best honey"..he just bottled it up. I said "OK" and went to my car got a $20.00 and I told him I would take the CD and the Honey for $20.00, learned that from watchin' the Pickers. ;-) Anyhow .... as we walked he wanted to show me the rest of his car collection under the carports he had erected..OMG how fun was that from Model T's that delivered coke piled with junk to 67 Camaro's to a 60' Ford Falcon with original immaculate interior...well not immaculate, but original! I made some iPhone shots. Then he said that's why he carries "this" and he put his hand in his left pocket and showed me his handgun he carries 24 ~ 7. He said he had some guy come all the way from Venezula to buy one of his cars. He gave me his card and signed it with good blessings to me! as well as apologizing for coming on so strong when he met me. So, I came away with some images and a story.
Then I headed for some dinner, and there was a terrific rainstorm with lightening and thunder while I was eating. Afterwards as I was heading back to Martinsville,  I saw the sky breaking behind me in the rear view mirror around sundown. I made a u-turn headed back up the road to an over look called Lovers Leap I had seen it on the way to Mabry Mill and pondered then if it would be a good spot for a sunset. Yes, I felt blessed!
The sky turned orange and the passing storm had created mist in the valleys.
It really was a fun day rambling...
Now I gotta pack up and get ready to head back to Baltimore in the morning. 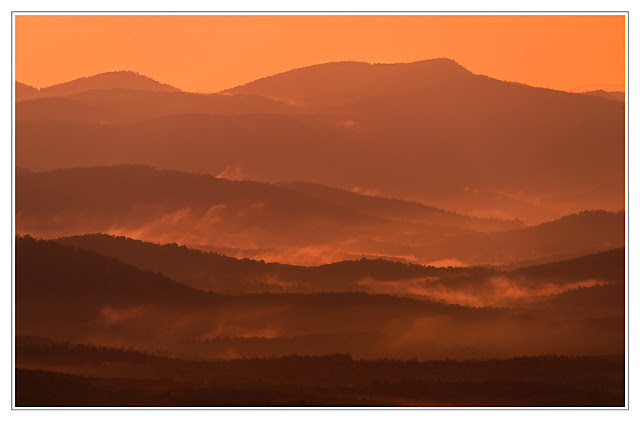 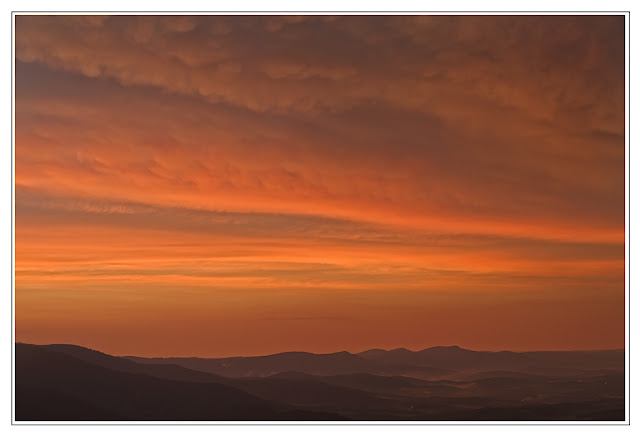 Oh and here's a few clips of old Clydie "Boy" Turner I found on line...as well as a link to a KKK site where he hosted a rally in 2003.
U-Tube by the locals here:
http://www.youtube.com/watch?v=OzT5tFpCf_E
In 1994 this was quite a business looking at this u-tube of Clydie Boys Pig.
http://www.youtube.com/watch?v=YDzH3zqBA1Q&feature=related
You just never know who you will meet on a photo ramble! Life's an adventure! Take it!
And a shot of the mill that started it all.... 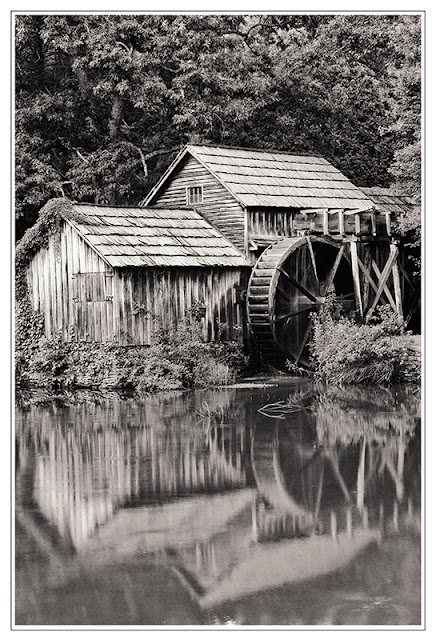