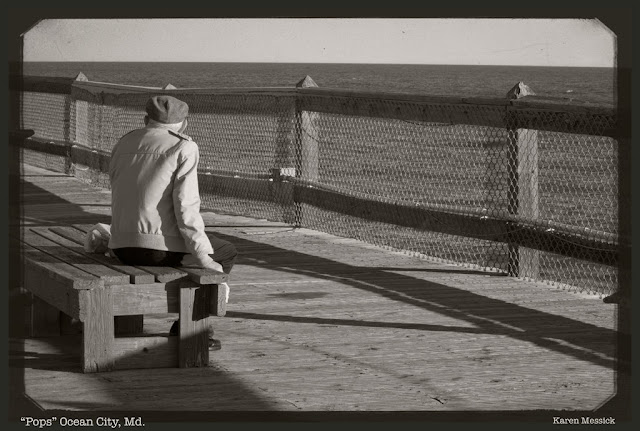 Today I caught up on a little sleep as it was raining in the morning. I also processed a few more images from the last few days. I am still working on the pier and sunrise collection, so here's a few I worked on today.

The image above was created when I was on the pier shooting; this man sat down on the bench, and I decided to take his picture. Today when I developed it, more emotion came from it as I reviewed the image. When I shot it, I was thinking, yes, an elder gentleman, resting at sundown, observing the sea. Today when I looked at it some more, I realized that, my dad had worn the very same hat and coat and had the same white hair before passing eight years ago. While my dad had a little bigger stature it still stirred memories of his presence. Later on a family that was at the end of the pier came walking back and in fact it was their dad, who weary I am sure from the day decided to sit while the rest went to the end of the pier. I mistakenly thought when my eyes first fell on him, that he was just an old man alone by the sea, instead he had his family